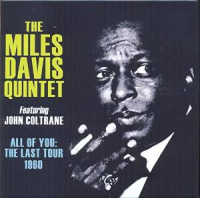 The problem with Miles Davis' 1960 European Tours has been one of programming. First to know is that Davis toured Europe twice in 1960: the first time with John Coltrane, March 21st to April 109th, and then with Sonny Stitt from September 27th to October 13th. The second thing to know is not every performance of the tours was recorded. What "complete" means is "all that's available. Like any number of Rolling Stones bootlegged performances, Davis' European recordings have been released para-legally in every conceivable combination. In the last 20 years, this tour has started to be sorted out. In 1992, Dragon released Miles Davis in Stockholm 1960 Complete, collecting all existing performances Davis had with both John Coltrane and later, Sonny Stitt. The package was wisely marketed as "complete" and is a grand collection of some Davis that would have otherwise gotten away.

Another effort at releasing material from Davis' 1960 European Tour reveals itself in All of You: The Last Tour. The "last tour" part refers to Davis' final tour with Coltrane. Note immediately the absence of the word "complete" from the title. This collection is not the complete available performances of the Miles Davis quintet with John Coltrane in Europe 1960. Absent because of alleged copyright conflicts is the band's appearance at L'Olympia in Paris, France, Mar. 21, 1960. These sides are currently available on Miles Davis featuring John Coltrane: Olympia-Mar 20, 1960 (Delta, 2002). Characteristically, the French crowd was quite receptive to Davis but were put off by Coltrane's evolutionary sound since the release of Kind of Blue (Columbia, 1959), a year before these appearances.

Coltrane was already moving on from Kind of Blue and before. Coltrane's experience with the modal approach of that album began to inform all aspects of his playing, opening it up creatively, harmonically and anti-melodically. Between Kind of Blue and these concerts, Coltrane recorded Giant Steps (Atlantic, 1960) and Coltrane Jazz (Atlantic 1960) the latter being the first recordings with pianist McCoy Tyner and drummer Elvin Jones, half of his classic quartet. While Davis was on his second European Tour, Coltrane was recording what would become My Favorite Things (Atlantic, 1961). So the John Coltrane of the Prestige era, 'Round About Midnight (Columbia, 1957) and Milestones (Columbia, 1958) was mostly assimilated into his new, searching musical personae manifesting in his European performances. Coltrane was up to speed but the audience was not. The audience was still in the creative pocket of Davis, focused on his role while Coltrane hit hyperspace.

There are two trajectories demonstrated in these recordings, each an evolution with different momentums. Coltrane's evolution is obvious. What he did every time he soloed was build his wall of sound, usually with a fairly simple theme that transmogrified into a torrent of notes. Melody was completely discounted in preference to harmonic investigation. It does not take Coltrane long in his solos to step well beyond what is otherwise a fine mainstream rhythm section, making it apparent that he has something else in mind. Coltrane's frenetic excursions pushed drummer Jimmy Cobb and bassist Paul Chambers into the post-bop realm that would be inhabited by Tony Williams and Ron Carter in just four short years. It was apparent that Coltrane was "going to need a bigger boat." What Coltrane effectively did was lure his audience in with some simple phrases before scaring the shit out of them with his "sheets of sound."

Up to this time, Davis was directing his music conservatively, retaining manageable tempi and arrangements that at least approximated his original recordings. On the present recording, the listener readily hears a creep upward in tempo. It is certainly not that which Davis would adopt with his second great quintet, but his direction was apparent. Davis is still using the paradigm he developed over the previous five years. It could be argued that Coltrane's transition during this period at least pointed in the direction Davis would take in the genesis of post bop. Where Davis is (for the moment) comfortable with his rhythm section from Kind of Blue, Coltrane is anticipating the need for broader thinking. Compare the Coltrane versus Stitt performances of "Walkin'" from this tour and it will be apparent.

Most writing about this recording justifiable focuses on Coltrane, but Davis is entering a search mode also, he just has not caught fire yet. This is very listenable Davis from a stable part of a transition period between the first and second great quintets. This music remains an important documentation of the house that Louis Armstrong built and Davis added on to.