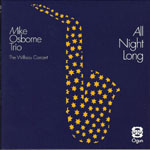 First issued in 1976 and now making its CD debut with a sumptuous 26 extra minutes, what hits you from the opening moments of this live album is the full-blooded passion and commitment to every single note.

That isn't too much of a surprise, given that Mike Osborne was undoubtedly one of the most formidable sax players to emerge from the fertile grounds of British jazz in the late 1950s and 1960s.

A glance at many of the key groupings of those periods shows just how close he was to the pulse, appearing in musically diverse settings such as Mike Westbrook's bands in the fifties and beyond, Humphrey Littleton, Chris McGregor's Brotherhood of Breath, Kenny Wheeler, John Warren, and bassist Harry Miller's Isipingo.

As distinctive as he was in the multitudinous troupes on the scene, it was in the smaller settings such as the glittering duets with pianist Stan Tracey, SOS (the inspired venture with John Surman and Alan Skidmore), and in his own trio, formed in 1969 with bassist Harry Miller and drummer Louis Moholo, where the sheer mobility and restlessness of his playing really took off.

Freed of the discipline of ensemble horn charts Osborne roamed wherever the inclination took him, and in Miller and Moholo he had the perfect accomplices who not only followed, but also pushed and pointed to pastures new at every other beat of the bar.

All three blaze their individual trails around the mixture of original compositions, improvisations and standards with the acceleration and exhilaration that makes the car chase sequence from The French Connection (1971) look like a drive out on a sunny Sunday.

Osborne's reputation as a soloist has occasionally jousted with that of Ornette Coleman's, an understandable comparison given the unswerving intensity and close-knit group work that characterizes their respective approaches. However, the rasping fluidity showcased in traditional folk-influenced tracks such as "Scotch Pearl" is every bit his own, scorching the audience in Switzerland's Willisau with an all-out assault of dazzling boldness and quirky adventurousness.

Moholo's quicksilver reflexes (particularly on "Round Midnight") are a constant delight, and for every swirling chorus or break of fiendish intricacy Osborne dispatches, Miller's muscular runs meet them head-on, offering harmonic and rhythmic contrast.

Alternating between a focused and precise articulation on the one hand and a furious abandon on the other, Osborne's outpouring is truly astonishing in its fervor and melodic reach.

Constantly on the boil, All Night Long is a high point in a career that was sadly only occasionally captured for posterity.

The mental illness that prematurely silenced Osborne's uniquely savage delivery in the 1980s, and his eventual death from lung cancer in 2007, makes this set especially poignant and wholly compelling.