Patrick Ames: All I Do Is Bleed 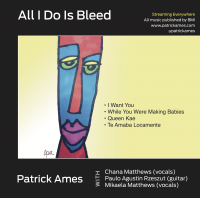 Lyric writing is an oft under-appreciated element in contemporary music. Guitarist/songwriter Patrick Ames puts lyrics front and center in his rootsy tunes. Somewhere between Tom Waits, The Velvet Underground and Robert Johnson (without the slide), Ames' stripped down recordings are direct a transmission of his feelings, aided by gritty, loose arrangements that give the feel of a living room jam session; safe to say there were few overdub sessions involved.

With his latest EP, Ames conjures feelings of longing with songs like "While You Were Making Babies," the strongest tune on the EP and a poppy upbeat number that would be fun if the subject matter wasn't so sad. Almost as good is "I Want You," the melancholic opener that straddles the borders between spoken word, new age, and late Dylan-esque ballads, culminating in a modest guitar solo.

The instrumental, "Queen Kae," continues in the same vein, bringing forward a mix of emotions with its drone-infused textures and bare-bones lyrics. Ames uses drones and pads throughout the record, both with voices and synths, to great effect.

The closer, "Te Amaba Locamente," features Argentinian guitarist Paulo Augustin. It shares the overarching somber mood, but, aside from one section featuring three-part vocal harmonies, the song struggles to lift off.

Overall, the record has a strong, distinctive style that seems to remain true to the composer's vision, but lacks the diversity in tempo and instrumentation to make it hold up for repeated listenings. Still, it is an interesting listen. Fans of Tom Waits, Leonard Cohen and rock-infused blues may enjoy this record.

I Want You; While You Were Making Babies; Queen Kae; Te Amaba Locamente.