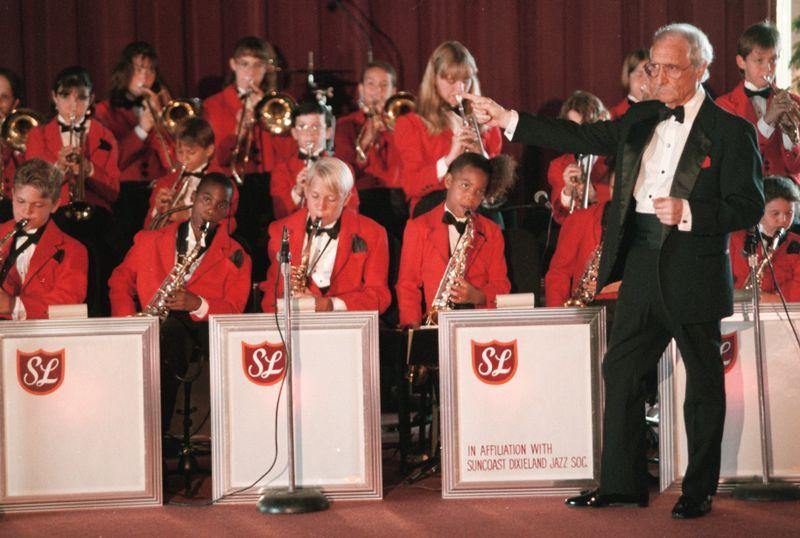 By DOM MINASI
June 24, 2013
Sign in to view read count
I bet you thought I meant Sonny Rollins When you hear the name Sonny, it's usually synonymous with Sonny Rollins, Sonny Stitt, Sonny Fortune or even Sonny Sharrock; all of them jazz heroes. But there is a Sonny you probably have never heard of before who is a super hero.

Who is he? His name is Sonny LaRosa. He is an 87 year-old retired jazz trumpeter who lives in Florida and has done more for jazz than anyone I know. He goes beyond Miles Davis, Charlie Parker or Sonny Rollins and a whole slew of others—yes, more than all of them.

How is this possible?

All of the jazz greats helped create as well as perform, compose, and inspire others to be jazz musicians and fans; but unless you grew up in a household that had jazz playing on the radio or stereo, or were introduced to jazz by a friend or relative, like most kids today, you don't have any idea what jazz is or sounds like.

Sonny LaRosa changed that. He teaches youngsters up to twelve years old to play and perform in a big band setting. And in doing so he has helped to bring new audiences and fans to a music that is in dire need of promotion in the USA and he does it out of the goodness of his own heart and the love of jazz. It does not make him rich or famous. It just makes him happy. The craft that he grew up loving and playing has reached generations of kids and in turn has taught them to love an art form that is America's classical music.

Inspiration is a wonderful thing. You may be inspired, but someone has to teach you to use that inspiration. A great teacher not only teaches what you need, but inspires and instills an appreciation for the music which you can pass along whether you become a professional, amateur or fan.

Sonny LaRosa was born on May 29th 1926. He began studying trumpet at the age of ten in Queens, New York. While attending Bryant High School he led the swing band and won a scholarship to the New York Philharmonic and began studying with the principal trumpet player William Vacchiano at the Julliard School of Music. "I always practiced very hard, three to four hours daily, gaining a very fluent technique and control of my horn," he says.

The scholarship was intended for Sonny to make a career of symphonic music, but his heart was set on playing in a big band. "When I was ten years old my father would take me to the Apollo theater to hear Louis Armstrong Duke Ellington, Lucky Millinder, Buddy Rich, Count Basie and just about every great living jazz artist. "We would go down to Nick's in the Village to converse with Bobby Hackett and Pee Wee Russell." Miff Mole befriended Sonny with advice and encouragement, but by the time he was eighteen, World War II interrupted his dream. He had hoped to play in the Army band but his Captain said absolutely not: "You're a foot soldier so forget it.

After the war, Sonny pursued his dream. He began working with his first big band, The Rolling Styles of Reggie Child's Orchestra. Leaving that band, Sonny became the featured soloist with the Bobby Meeker Big Band. Unfortunately, he was not happy with Bobby's band and so he auditioned for Chuck Foster's band at the New Yorker Hotel in 1947. Getting the job, Sonny was placed in the lead trumpet chair. The band traveled a lot. The experience was invaluable, especially performing on the radio, broadcasting coast to coast. Foster was a hard leader and he did not appreciate some of Sonny's humorous antics. He fired Sonny at least five times and, with each firing, within two weeks he would rehire him. With Foster's band Sonny recorded many records for the Mercury Label.

Sonny ended his big band career in 1951 when he married Elaine Tomei. This coming November 3rd the happy couple will celebrate their 62nd anniversary.

After Sonny decided to stop traveling, teaching became his main source of income, but in order to do so he had to learn other instruments like the guitar, which didn't work out too well for him. Frustrated, he sold it. Fortunately, pianist Irwin Cohen opened a music studio in Forest Hills, New York and asked Sonny to teach trumpet and guitar. Sonny told him he hadn't played guitar for over a year. "You mean you played before?" Guitar was such a popular instrument that Irwin thought that any musician could teach it by staying a few lessons ahead of a student (believe me that doesn't work). But Sonny knew differently. He bought another guitar and practiced two hours a day in order to be proficient enough to teach it. He also studied piano with Matty Bonelli. Bonelli had a studio in Belrose, New York. I started teaching at his studio in 1963. This is where I met Sonny. I was really flattered to discover that Sonny wanted my help. "After I watched Dom teach a lesson I asked him to help me and my son Mark," he recalls. 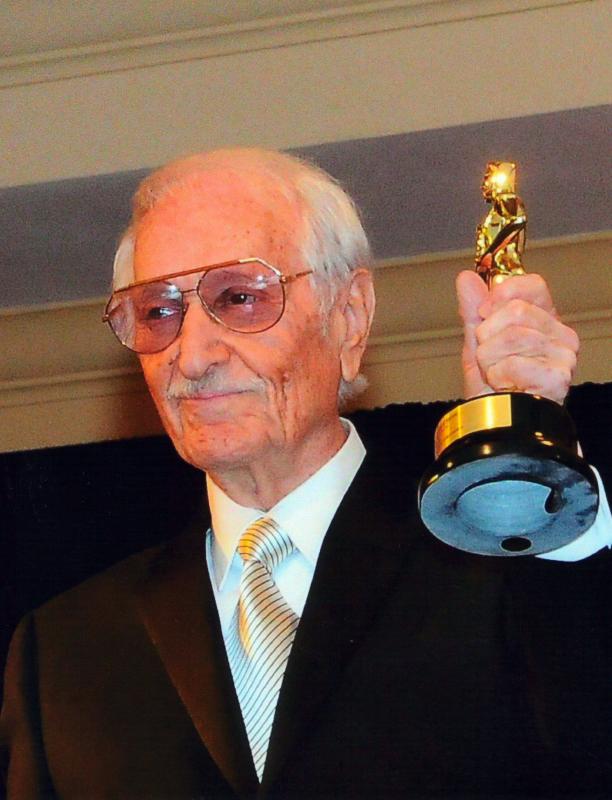 Later, Sonny moved from New City to Southold, Long Island and opened The Sonny LaRosa Music Studio where, along with his son, he gave lessons. But starting a new business in a small town isn't easy. In order to sustain, Sonny still taught in Queens, NY for two days a week and had to sleep overnight at a friend's house, because the trip was much too long from Southold to Queens, and as a teacher he would have been exhausted and not in any shape to teach.

There was also the problem of cancellations. Anyone who has ever taught knows what that can be like. On any given day you might expect to teach six hours and due to cancellations you end up with three hours with an hour wait between students. Not only is it a waste of time, you lose money. When Sonny and I were teaching in the early sixties, there was no such thing as being paid for a missed lesson.

Sonny could only endure this regimen for a year. It seems it was a losing proposition. His next-door neighbor was moving to Clearwater Florida. Clearwater sounded like a great place to live. Sonny visited him and while he enjoyed the weather, Sonny checked out all the possibilities of moving and teaching there at private and Parochial schools. He realized he would have to teach many instruments and when he got home he immediately went on a marathon of studying and learning saxophone, clarinet, flute and trombone. Sometimes he spent eight hours a day doing so.

Sonny left his family in Long Island and moved to Clearwater to try to create enough work as a teacher. He put ads in the local papers as a music teacher who came to your house. In Clearwater it seems music teachers taught out of their homes or a studio. Before long Sonny had eighty students. The next thing was to buy a house. In order to do so, he had to prove to the bank that he could afford a home. As resourceful as ever, just a few months later Sonny bought a home and his wife, Elaine, joined him. His son, Mark, stayed in Southold and started his own teaching practice which he still has—and is very successful at it.

After living in Florida for awhile, Sonny noticed the only kind of bands around were marching bands. Sonny had another dream, too—the same dream he had in New York City, but never pursued. He wanted to start and lead a swing/jazz band, but a band of kids up to twelve years old.

He started in St. Cecilia's School and some other schools and, after two years of hard work, America's Youngest Jazz Band came into existence. Since the very first day, more than six- hundred boys and girls have passed through the band and some have become professional musicians.

The band performed at the Montreux Jazz Festival in Switzerland in 1995, as well as the Montreal Jazz Festival, the Jazz and Heritage Festival in New Orleans and the Syracuse Jazz Festival...and the list goes on and on. Imagine being a young kid and traveling and playing throughout the country, Canada and Europe. How many kids have that opportunity?

Noted jazz critic, journalist and author Nat Hentoff, while listening to the band perform at the four-day jazz party in Clearwater for the first time, wrote in the Wall Street Journal, "The band's first number, 'Bugle Call,' jolted me out of my misconceptions. They had the impact of the1950s Basie Band."

How does Sonny do it? First of all he doesn't use stock arrangements. Each part is handwritten. He arranges for each kid at their musical level. In other words, when a young boy/girl joins the band Sonny checks their reading ability. If it is not up to speed, Sonny will write that part to fit the child's level till he/she improves. With each improvement the parts get a little harder. The sad part is that once you've reached the end of the twelfth month of your twelfth birthday, you've graduated and it's time to leave and make room for the next kid.

For over 35 years, Sonny LaRosa has given his heart, soul and time to this music and to hundreds of kids. On November 19th, 2011 the Dixieland Jazz Classic organization introduced a new award, The Sonny. Sonny LaRosa was, of course, the first recipient. If you don't know about him, Google him and the band, it will be worth it. The love of music shines through in everything this man has done.

From me to you, Sonny, thank you for all you have done.