By HENNING BOLTE
July 25, 2012
Sign in to view read count
Friday would become the day of trumpeter, vocalist, percussionist and guitarist Per Jorgensen (born 1952). He performed with his first group as a leader, Per Jørgensen & Friends, and also participated in pianist Jon Balke's Magnetic Book, at the Kongsberg Kirke. The naming of his group and the title of his program—"(Memories) From The Gallery ..."—both say a lot about his way of music-making. The program title refers to his singing in the church from the gallery, and alludes to all the influences that have merged in his music.

Jørgensen, from Bergen, is well-known in Scandinavia and has played in many combinations, including ensembles with Danish percussionist Marilyn Mazur, a duo with Terje Isungset, and both Jøkleba! And Magnetic North Orchestra, with Balke. He also teamed up with Finnish drummer Markku Ounaskari and pianist Samuli Mikkonen for Kuára: Psalms and Folk Songs (ECM, 2010). He has played in a great variety of musical contexts, including rock, blues, folk, African, church and jazz, in a variety of roles. This diversity has been absorbed in his music at an increasing high level. His music and musicianship are in no way stylized or overly polished, and he possesses a high degree of authentic enthusiasm. Jørgensen sings for the joy of it, not to impress.

Jørgensen's participation in All About Jazz Presents was especially meaningful, as it was the first time he had performed as a bandleader, introducing a new quintet of tremendous promise: longtime collaborator/percussionist Terje Isungset, whose Ice Music has gained him international stature; harmonium player Sigbjorn Apeland, whose duo with violinist Nils Økland on Lysøen: Hommage à Ole Bull (ECM, 2011) explored a set of overlooked music from the late 1800s; Kongsberg-born keyboardist Morten Qvenild, a defining force in In the Country and his duo with singer Solveig Slettahjell and in Susanna and The Magical Orchestra; and Bergen-based electric bassist Morten Skage. 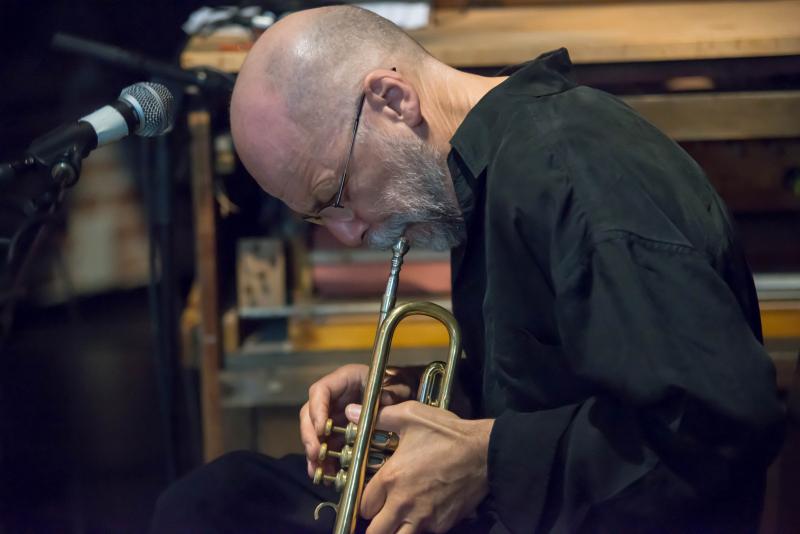 Jørgensen's trumpet playing possessed a very direct, strong and sharp tone, regardless of whether he is playing lyrically or bursting out. His interaction with Isungset was tremendously varied and rich. Isungset was also surprising; playing with untreated knotty and gnarled sticks, he does what those sticks allow him to do and it always sounded both appropriate and wonderful. Sound-wise he regularly let a reindeer trot along, though integrated into the sound as a whole it was not immediately recognizable as such—a quality that also applied to his sophisticated stone percussion.

Contrary to first impressions, nothing worked in a standardized or usual fashion. Qvenild applied his electronics in subtle ways when injecting them into Apeland's astonishing harmonium efforts, and Skage contributed flexibly and well- portioned to both melodic and percussive dimensions. Jørgensen played percussion, too, and opened up to sing deeply from within. The group as a whole carried music from deeper grounds to a higher plane. In the grandiose finale, the sky and soul opened up to joyful delight. Jørgensen had so much more to offer here than in the Kuara trio; a great musician living the music.

An hour later, Jørgensen was back again,this time in Kongsberg's wonderful baroque church with Jon Balke's Magnetic Book. Kongsberg Kirke has fine acoustics and a famous organ, built in 1765 by Gottfried Heinrich Gloger and restored in 2001 by Jürgen Ahrend. The organ has given name to an annual chamber music festival in Kongsberg (Glogerfestspillene), held in January each year. 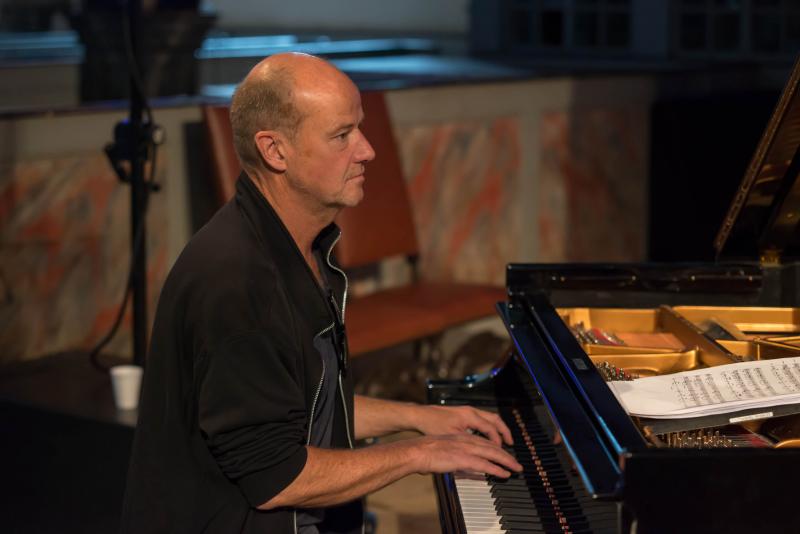 Pianist/percussionist/conductor Balke performed with a four-piece group featuring Jørgensen, clarinetist Havard Lund, bassist Bjørn Kjellemyr and percussionist Helge Norbakken, along with Copenhagen-based violinist Bjarte Eike and six string players from the Barokksolistene, who were last heard with the pianist performing music from Siwan (ECM, 2008) alongside Moroccan singer Amina Alaoui, trumpeter Jon Hassell and others during their 2009 Shared Sounds Festival in Berlin—a great experience. Eike started Barokksolistene in 2005 as a flexible ensemble appearing as a chamber orchestra, but also as a pub band, free improvising group, crossover ensemble and intimate chamber group. Magnetic Book is a continuation of Balke's Magnetic North Orchestra, which joins percussion and strings with improvising soloists on the basis of a series of signals to direct the ongoing improvisation.

This sounds promising, but reality truly excels the description by far. There are not many ensembles acting and playing in such a loose way with these diverse elements. The music traveled from a baroque piece with Jørgensen singing, to a bolero-like passage with clarinet and wild percussion, and a joyous trumpet solo with strings and pure percussion discussion, set to a deep, up-tempo groove. The string-players not only moved freely throughout the church with their instruments, but also got in and out of the music, both loosely and floating. All was kept together by Balke's and Eike's cues, and driven magnificently by the great Norbakken. This music has to be experienced live in a place like this; up to now, the live experience had always been far superior to Balke's Magnetic North Orchestra recordings.

Bassist Mats Eilertsen chose a stellar team to built great, floating and flickering lines around his grandly rotating and dark bass: two Norwegians (saxophonist Tore Brunborg and guitarist Thomas T. Dahl); and two Fins (pianist Alexi Tuomarila (1974) and drummer Olavi Louhivouri, who both also work in Polish trumpeter Tomasz Stańko's Dark Eyes Quintet), formed SkyDive. With a lineup like this, it was possible to surge and wallow in a set of great quality.

Eilertsen proved a great bassist, bandleader and writer of wonderful dwelling, circling and expanding songs, like his masterful "The Old Oak" (a nice image of his bass sound). This was, no doubt, a great band, with every member playing in a sophisticated fashion. Every piece (written by Eilertsen) allowed the quintet to reach far out: it happened in some pieces with great dynamics; in others, it rippled magnificently. But there was no scrubbing, no grazing, no hard edges, no screaming or loud laughter; only soft smiles, perhaps due to the music's bird's eye perspective. There was also no lightning or thunder, which some other groups brought in abundance. Instead, SkyDive stayed on the albatross side of the musical continuum.

Genre and style boundaries are easily crossed or wiped out in Norwegian music. Another remarkable thing: players continuously create new combinations which explore, discover and develop new territories as well as new sides of old landscapes. One of these combinations was the percussion trio formed bv trumpeter Arve Henriksen with percussionists Audun Kleive and Helge Norbakken. In the trio's early performances in 2011, despite being used to the image of Kleive's huge drum set, it was a surprise to see him operating on a small set of electronic Wave drums, together with Norbakken's special assortment of sound-making materials and Henriksen's acoustic and electronic devices, transforming noise and sounds into music. Here in Kongsberg, however, Kleive returned to the drum kit (equipped with just one set of high hats) when his Wave drums malfunctioned the day prior.

The trio's sound expedition started with muffled trumpet and various kinds of rustling sounds, gradually intensifying and transcending into heavy, violently raging soundscapes. With the roaring dying down, Henriksen's otherworldly maqam-singing emerged. Samples also surfaced, and were planted into the jagged and jolty sound biotope, a sound environment of accumulating drum waves big and small, loud and deep, and low and high, from wooden, metal and other material sources. Complementary to the spontaneous process of creation, there were side-projections, things discerned that may not have been intentionally put into the music, such as sounds like that of Tibetan horns.

This energy-driven rampant sprouting had its restrictions, too. Melodic elements were simple and repetitive. Effects very much depended on when, where, and into what process they were brought. With the trio's unique approach to tension, contrast and emergence in spontaneous creation, Henreiksen-Kleive-Norbakken finished the All About Jazz Presents series by keeping the field open and passing on the challenge.

There are many remarkable musicians and groups, spanning different generations, on the Norwegian scene. For something like All About Jazz Presents: Doing It Norway, a sharp selection was required, making no definite judgment. Musicians and groups you would expect were not there and the other way round: musicians who were not expected to be there were presented. Most importantly, the series shed some special light on the scene in a broader context, with a sufficient range and fertile perspective. Hopefully this first-time collaboration between All About Jazz, Music Export Norway and the Kongsberg Jazz Festival can serve as a focused sampler—or a benchmark, even—across a continually moving and changing field of music.