By IAN PATTERSON
March 2, 2020
Sign in to view read count 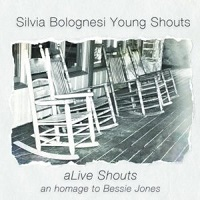 Tackling the folkloric tradition of another country can carry the pitfall of sounding palely imitative, or worse still, a pastiche. But when the source is but a launching pad for personal expression then the results can be vital and unique. In celebrating the music of American gospel-cum-folk singer Bessie Jones (1902-1984), Silvia Bolognesi's Young Shouts—an all Italian quartet—responds to the rhythmic energy in Jones' field songs, children's songs, chants and gospel call-and-response, with jazz of uncommon vibrancy. Recorded live at il Lavoratorio, Florence, the music is rooted in tradition yet burns with contemporary urgency.

Two Silvia Bolognesi originals bookend the set. On the aptly tempestuous "Chicago Storm" trumpeter Emanuele Marsico, who doubles on vocals throughout, belts out the lyrics like an evangelical preacher forecasting hellfire and damnation—the prelude to fired-up solos from alto saxophonist Attilio Sepe and the trumpeter. All the while, Bolognesi's propulsive ostinatos and drummer Sergio Bolognesi's snappy stick work drive the quartet relentlessly. The album's only non-vocal number, "Semplice," by contrast, moves from a restless and somewhat abstract collective intro into more unified and melodic direction. Just when the music seems to be verging on joyous release the quartet slams on the brakes.

In between, a forty-minute, six-part suite pays overt homage to Jones, whose legacy lives on largely thanks to the recordings of the singer that ethnomusicologist Alan Lomax made in New York in 1961. The quartet's chemistry is pronounced in this visceral performance, especially in the improvised passages where Sepe and Marsico's lines criss-cross thrillingly. Jones' gospel roots are evidenced on "You Better Mind," a slow-burning sermon of impending judgment day. Hand claps and call-and-response vocals guide the catchy "Shoo Turkey." On this catchy tune Marsico's vocal rhythm gradually melts into Bolognesi's bass line, while trumpet and saxophone alternate between elegant harmonic lines and biting solo excursions.

Bassist and drummer lay down a wicked groove on "I'm a Rollin,'" a vehicle for Sepe and Marsico to strut their stuff in exhilarating fashion. The final two minutes of this song feature an unaccompanied drum solo, which bleeds into the child-like vocal rhymes of "Hambone." Once more, the rhythmic energy of Marsico's vocals serve as a prelude to the quartet's meaty improvisations, this time over fast-walking bass. Bolognesi, whose profile has risen through her work in Roscoe Mitchell's sextet as well as the Art Ensemble Of Chicago, steps into the spotlight here with a sinewy solo. The leader handles lead vocals on the infectious, clap-along "Sometimes," sampled with some success in 1998 by dance/electronica artist Moby, who had heard Jones on Lomax's 7-LP compilation of field recordings Southern Folk Heritage Series (Atlantic, 1960). Saxophone and drums combine in freewheeling play before Marsico and Sepe reconnect on the breezy outro.

aLive Shouts is a gutsy ode to an African American singer of enduring significance. Silvia Bolognesi's Young Shouts honor Bessie Jones not merely by borrowing her lyrics, but by playing with the sort of passion and sincerity that was the singer's musical currency.