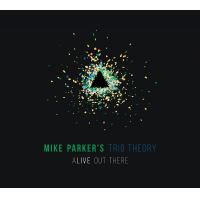 Fans of post-apocalyptic stories need not worry about whether they still will have rock music once the electric grids go down. That is, if we can turn the clocks back to the days when jazz musicians were rockstars. Perhaps the supposition of the band, Mike Parker's Trio Theory, is just that. Kill all the living dead, because this acoustic music is electrifying.

Parker, an American-born bassist, now living in the jazz-rich city of Krakow, assembled a trio with Polish saxophonist Sławek Pezda and Chicago drummer Frank Parker (Kurt Elling). Pezda performed on Parker's previous recording, the frenzied Embrace The Wild (self produced, 2015). Here the trio presents the fruits of a 30 concert/36 day tour of Poland, Romania, and the Czech Republic from the fall of 2015.

What is immediately apparent, and often the result when the leader is a bassist or drummer, is the sound mix is well balanced. Parker's bass opens "Arctica" with a repeated line, inviting Pezda to play the melody and off they go. The piece balances the theme against a monstrous workout of ferocity. Pezda's tenor saxophone sounds like an amalgam of JD Allen and Mats Gustafsson. Lest we call this free jazz, each piece was composed by the bassist with the changes skillfully handled. "Kobra Kai Dance Remix" (also heard on his previous recording) begins with Frank Parker playing a Clyde Stubblefield beat, and of course, Pezda follows with some Maceo Parker. "Rob Ford 4PM" has much more subtlety than the former crack addict mayor of Toronto ever showed. As the title states, it's four PM, and time to party. The pace of the music escalates with saxophone notes intensifying before the crash and the duet between Parker and Parker. The joy here is that the trio can come at you heavy—"Hermit The Dog," with Parker's chest thumping bass pulse—or with the mostly chamber-like sound of "Unwritten," a clement piece that wouldn't be out of place on an ECM session. Rockstars also have sensitive sides.

Title: Alive Out There | Year Released: 2016 | Record Label: Self Produced