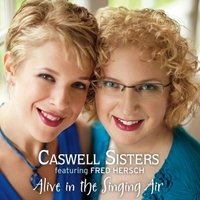 Sibling acts in jazz are fairly common, but sister acts are not. The Brothers Dorsey, Jones, Montgomery, Heath, Brecker, and Marsalis are familiar to any jazz fan with a passing knowledge of the music's history, but female counterparts are scarce. Thankfully, that trend is changing, proving that jazz is not a man's—or brother's—world. Today, we have brother-sister combos, like Anat, Avishai and Yuval Cohen, male-female cousin couplings, like violinist Regina Carter and saxophonist James Carter, and sister sets, like pianist Shamie Royston and saxophonist Tia Fuller; the Caswell Sisters also deserve a place on this list.

Vocalist Rachel Caswell and violinist Sara Caswell come from musical stock, but they didn't exactly follow in their parents' footsteps; their mother served as a church organist and their father—Austin Caswell—spent three decades teaching at Indiana University's Jacobs School of Music. Both ladies spent their childhood under the tutelage of legendary Indiana-based jazz educator David Baker, and they both did their undergraduate work at IU's famed music school; just not at the same time. Their age difference kept them on separate, but parallel paths that would eventually unite them in artistry.

Rachel, the elder Caswell sister, went to the New England Conservatory for her graduate work in jazz performance, while Sara chose the Manhattan School of Music as her finishing school. They both participated in the Thelonious Monk Institute's Summer Residency Program, where they found artistic common ground, and they've each gone on to work with the cream of the crop; Rachel worked with trombonist Curtis Fuller and trumpeter Ingrid Jensen, and Sara served with vocalist Roseanna Vitro, bass star Esperanza Spalding and guitarist Gene Bertoncini.

While the Caswells have collaborated on record in the past, Alive In The Singing Air is their first album-length, co-billed creation. Their respect for one another and their mutual admiration for the work of pianist Fred Hersch, who comes aboard as pianist and associate producer, is key to the success of this album. Together, they form a power trio that's powered by sensitivity and genuine feeling, rather than strength. Bluesy sentiments ("Stroll"), lighthearted joy ("Sweet Lorraine") and positive vibes abound here. When they tackle the classics, they're respectful and original all at once; their take on "Poinciana" points to pianist Ahmad Jamal's signature version, with drummer Bryson Kern doing his best Vernel Fournier groove, but they remove the streamlined swing from "Bye Bye Blackbird."

Rachel is capable of touching on emotional nerves when delivering quality lyrics ("Song Of Life"), but she also captivates with scat singing in various places throughout the album. On the other side of the Caswell coin is Sara, whose clean-and-clear lines merge wonderfully with her sister's voice. But her violin sounds even better when it stands apart; her duo encounter with Hersch ("Lucky To Be Me") tugs at the heartstrings and leaves a permanent mark on the soul.

While the Caswell Sisters each live their own life, their sisterly bond has kept them connected in art and beyond; Alive In The Singing Air says all of that and more.

Song Of Life; I Get Along Without You Very Well; Stroll; Poinciana; Lucky To Be Me; I Sing For You; Bye Bye Blackbird; A Wish; Sweet Adelphi; Sweet Lorraine; Asiatic Raes.