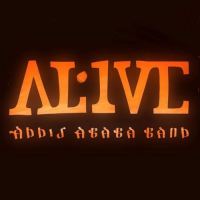 One of the best things about the digital age is that music is so easily shared. Music from different worlds is just a click away on platforms where independent artists and labels sell and stream their music. Naturally, this also means that it becomes easier to exchange one musical perspective with another. However, even in these globalized times, it is a rarity to experience a Danish big band from Aarhus dedicated to the sounds of Ethiojazz and Afrobeat.

Many big bands, as good as they are, stick to a relatively conservative understanding of the big band format, which means that the experiments with genre often take place within an established jazz tradition. AddisAbabaBand, as the name reveals, has another starting point. Named after the capital of Ethiopia, the band acknowledges Ethiojazz maestro Mulatu Astatke as a primary influence and ventures into different journeys of funk on Alive, a live album that follows up on two previous releases: their self-titled debut and the single Rainbow Warrior / Laika Laika Interstellar .

The party starts immediately with a new track, "Space Pants." It introduces a solo guitar riff that is elaborated when another guitar enters. Punchy horns and percussion are added in a swirling dance with Simon Eskildsen's electric piano on top. Next, the band plays both sides from the single Rainbow Warrior / Laika Laika Interstellar . Especially the A-side, "Rainbow Warrior," is interesting. It is a cover of a composition by the Danish bassist and composer Jørgen Schmidt. Schmidt was one of the pioneers in the reggae-environment in Denmark and wrote "Rainbow Warrior" as a protest song against the bombing of the Green Peace ship Rainbow Warrior. In the AddisAbabaBand-version, the vocal is handled by percussionist Preben Kaels and he pushes the fusion of fiery funk and deep reggae rhythms forward with his voice ending in an ecstatic roar. The ecstasy is also built up on the track "Zion" with fabulous flute playing from guest star, Ali Diarra.

Another unusual track amid the feast of funk is the band's "Koklokkkemanifest" (the Cowbell Manifesto). It is read in Danish and is a description of the virtues of the cowbell where it is underlined that:

"it should always be played with an open and attentive approach to the world. Only in this way, it can become a manifestation of the interconnection of everything."

The cowbell manifesto could be translated as AddisAbabaBand's approach to funk. Those looking for a pure version of Afrobeat or Ethiojazz will probably be disappointed. However, for those who recognize funk as a world language where Mulatu Astatke, Fela Kuti and James Brown can engage in musical conversation with a group of admirers from Denmark, AddisAbabaBand is a powerful reminder of the ability of music to cross geographical boundaries all the way from Aarhus to Addis Ababa.