The pianist's own reverence for the repository dates back decades and his method of improvisation couches heavily in the angular proclivities of his elder influence. 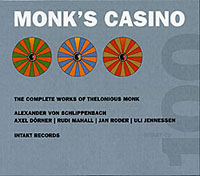 Monk covers are as regular as the tides these days. Everyone from Wynton Marsalis on one end, to Steve Lacy at the other, has seemingly picked the songbook clean. Most have mined it for the more accessible ore and left the more erudite entries, tunes like "Sixteen and "North of the Sunset, untapped. Into this arena of precedence and cherry-picking Alexander von Schlippenbach audaciously ups the ante by tackling the entire compositional corpus. Live in front of an audience with no tune left behind. The knee jerk question is "why? followed closely by the counsel quotable through an apropos Monk title, "Well You Needn't. Schippenbach and his colleagues stampede the doubters and skeptics with a resounding and emphatic "why not?

Such a temerarious enterprise requires the conscription of a team up to the rigors of the challenge. Always the savvy strategist, Schlippenbach enlisted an existing quartet, Die Enttäuschung, whose principal repertoire already revolved in Monkian orbits. The pianist's own reverence for the repository dates back decades and his method of improvisation couches heavily in the angular proclivities of his elder influence. Rudi Mahall, Axel Dörner, Jan Roder and Uli Jennessen are younger in years, but no less enraptured with their chosen muse. Operating under the colorful collective sobriquet Monk's Casino, the five channel their energies to the daunting task of doing the music justice. And while it's obvious that diligent rehearsals presaged the program, the set still exudes the extemporaneous thrill of roulette wheel in motion, the whims of chance at least partially dictating song order and structure.

All seventy compositions from the hat-and-bearded one's venerable folio receive exposition. Taped over four days at the Berlin jazz club A-Train (though the quintet reportedly tackled the entire oeuvre in a single evening at the 2002 Berlin Jazz Festival) the tracks benefit from a sharp fidelity and inclusive mix. The interpretations run a sweeping gamut. A handful are retooled as medleys, among them an inspired coupling of "Let's Cool One/Let's Call This. Some like "Stuffy Turkey and "Ruby My Dear are rendered in boiled-down miniature with barely room enough for terse melody statements before the page turns. Others unfold over lengthier stretches, but none crack the six-minute marker. Schlippenbach varies the flow, keeping the catena moving and off-kilter as the five men jump from one improvisatory bullet-point to the next.

Mahall's bass clarinet occupies the slot so commonly held by tenor saxophonists in Monk's own bands with shrewd acumen and aplomb. Only occasionally does he indulge in the stomach-in-throat intervallic swoops that date back to Dolphy's innovations. More often he jockeys the middle registers, slaloming the zigzagging rhythmic peaks and troughs with sure-fingered ingenuity. His husky terpsichorean improvisations on "Introspection illustrate one example of many clever turns. Dörner's trumpet often favors gelid voicings over calefactory ones. On "Green Chimneys his inflection crumples into crisp crenellated textures while a solo Clark Terry-inspired rendering of "Eronel takes shape in a cool succession of slippery soap bubble notes. Roder and Jennessen do far more than summon simple support. Conjoining the snare and cymbal veracity of Monk alum Art Taylor with the capriciousness of a Jim Black the drummer keeps the beats both elastic and erratic. Roder weighs a similar balance on bass, cantilevering between even-keel and abstract counterpoint. Assuming the prerogative of low-key leader Schlippenbach's keys caulk the crannies, sketching a mercurial circuit from frontline to comping roles.

The band also accords ample sway to its freer leanings in a manner that Schlippenbach's other cover band, the standards-only Night & Day, isn't prone to. "Monk's Dream wobbles playfully on a scrubbed-skins rhythm and fractured string-dampened facsimile of the theme. Mahall injects steam whistle screeches and Dörner growls metallically both open and muted. "Consecutive Second's receives new life as a stomping staccato boogaloo while "Gallop's Gallop erupts as a gloriously rambunctious freestyle fracas. The third disc pitches a few other curveballs as Schlippenbach and Dörner switch instruments for a mishmash medley of "Japanese Folk Song, "Children's Song and "Blue Monk. Toward the set's close Aki Takase takes the stage for fleeting rumination on "A Merrier Christmas, her tinkly toy piano an amusingly pranksome presence recalling Monk's own late-50s experiments with celeste. But, as Schlippenbach states via his prefatory address in the set's accompanying booklet, even with liberties freely taken, the crux of importance rests with respecting the integrity of the tunes. Even the most abstract statements, such as the disembodied breath sounds that presage "Bemsha Swing," subsume self-effacingly to the probity of the themes proper.

Does the world need yet another glorifying and adulatory Monk project? The answer to that interrogative is as subjective as any other aesthetic question. But when the results convey as much clever creativity and unflagging brio as this industrious Intakt offering the inclination to argue against the enterprise withers easily in the mind.