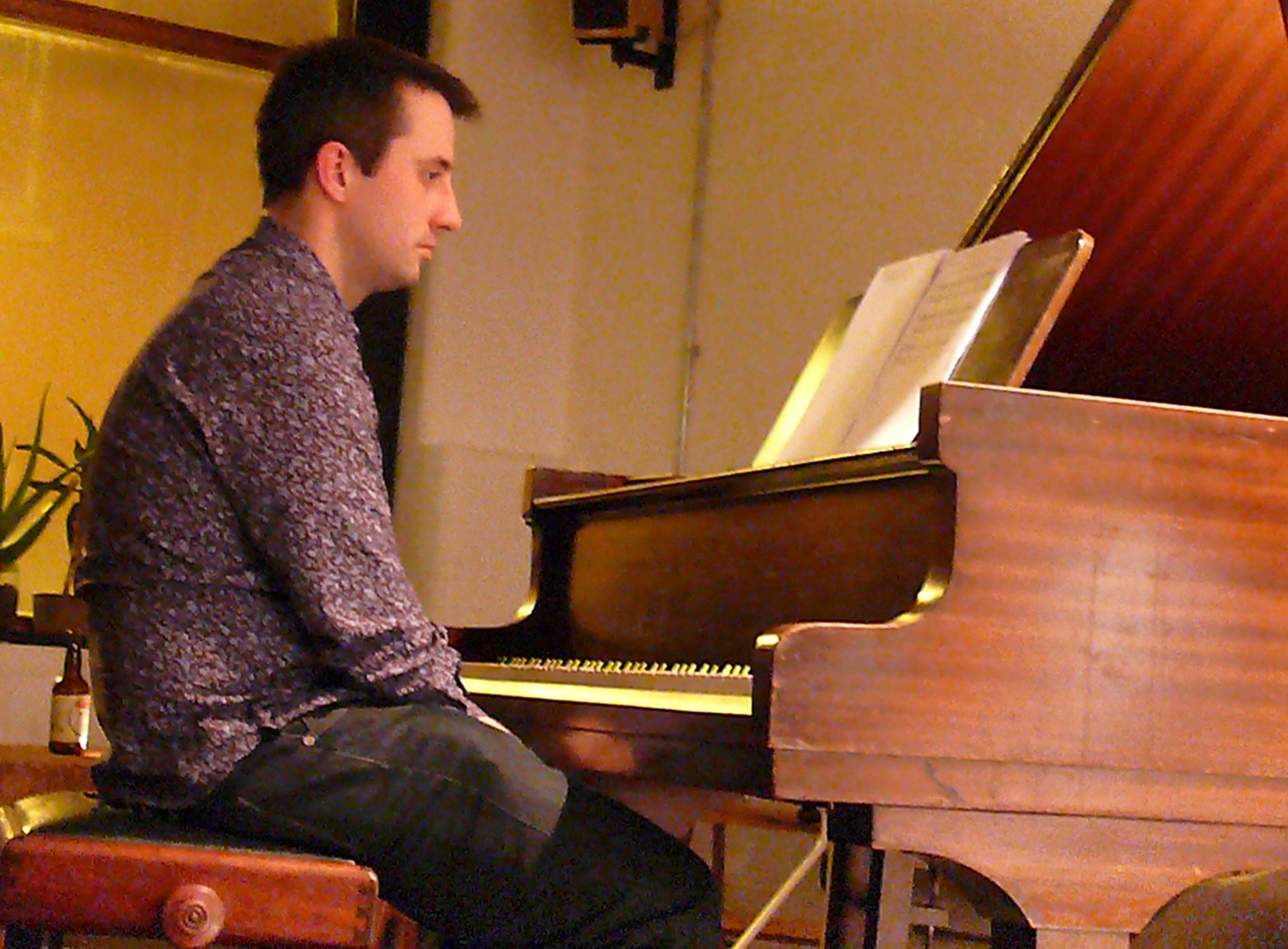 What do you do when two mainstays in your band leave? Tonight's gig was the first outing for the new line up of pianist Alexander Hawkins' group, necessitated by the loss of regular bassist Dominic Lash to New York City for a year, and drummer Javier Carmona's return to Barcelona. There was a lot to live up to: the old aggregation was a cohesive unit of long standing which had built up a fine rapport around Hawkins' challenging compositions, with their signature blend of written trickery that bespoke opportunities for improvisational expression.

With representation from almost every instrumental type, the new group appeared unprecedented and potentially full of mouthwatering combinations. Perhaps as a result of the new member's unfamiliarity with the charts, there were elongated free-form passages which showcased individual prowess. A case in point was the lengthy intro to the opening song, spotlighted by invigorating work from new face Oren Marshall on tuba and old stager Hannah Marshall (no relation) on cello. Ms. Marshall sat poised at her cello while Mr. Marshall drew sustained, resonant tones from his tuba. There followed a wonderfully responsive and expansive duet with the cellist squeezing the strings together as she scraped abrasively with the bow, while the bassman spluttered and popped. Eventually he shifted into a relaxed walk, around which she embroidered percussive textures generated by rubbing the body of the cello and strumming hard, before everyone launched into the lurching "Ologbo," named after the Yoruba word meaning a cat that comes home. Hawkins' illuminations seemed appropriate for the tune's ABA structure, with the bookending theme surrounding a trio section for Orphy Robinson on marimba alongside the two Marshalls and swirling interplay. 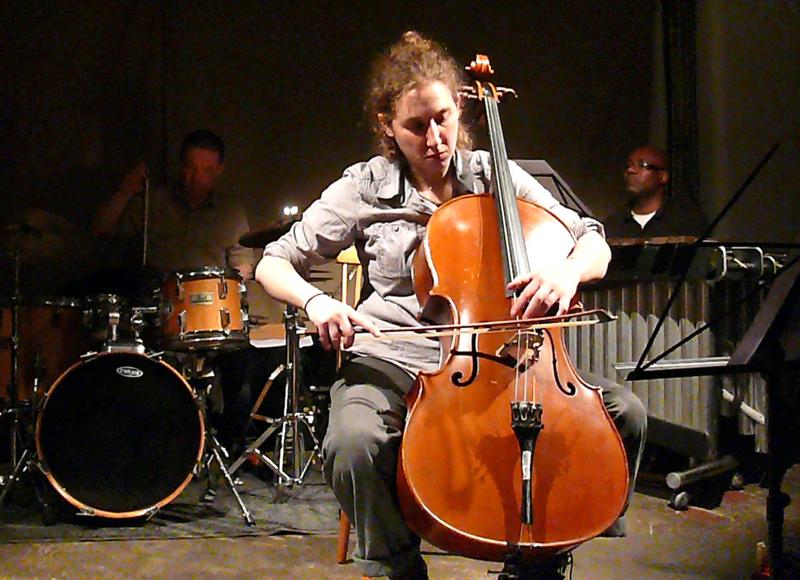 Even with this weightier ensemble, there was a predominantly chamber feel to proceedings. All Hawkins' tunes grant lots of room for improvisation, often while other subsections propagate composed material. So it was with "Baobabs." After an initial threesome of drummer Mark Sanders using his hands and mallets in tandem, Robinson on pealing marimba and guitarist Otto Fischer adding discreet swells—transmuted from quiet to tumultuous—reedman Shabaka Hutchings interpolated a calming phrase on clarinet, hinted at by others while the improv continued. That predilection for multiple events in the same space also manifested itself during a restless version of saxophonist/composer Anthony Braxton's "40F."

Oren Marshall, yet again, demonstrated his versatility with a mercurial multiphonic lead-in to the second set, layering broad vibrato to yield growling chords as a counterpoint to his brassy eruptions. He supplied even more excitement as the piece progressed, shouting and muttering through his mouthpiece as he blew to great effect.

One drawback to the larger company were the fewer chances allowed to savor Hawkins' ivory bothering skills. As well as being an ambitious composer, Hawkins is also a compelling improviser, as gainsaid by his appearances with a growing roster of talent including reed men Evan Parker, Joe McPhee (witness his organ work with Decoy on Oto (Bo'weavil, 2010) and drummer Louis Moholo-Moholo. A reminder of what we were missing came in a splendid excursion during the second set where the pianist shone with double-handed runs, incorporating combustive outbursts of barrelhouse stride along with traces of melody.

The rest of the ensemble were no slouches either. Fischer, positioned far left in the shadowy nether regions of the Cafe Oto stage, featured on "76-4," used his pedals and effects to create an impressionistic mélange of ringing lines and fluttering tremolos. Sanders would be a wonderful addition to any combo, but here the arrangements played to his strengths and fondness for timbral exploration. He took out one tune with a beguiling solo mixing unusual tonalities, drawn from cymbals and woodblocks placed on his drum heads, with blasts of pulsing abstraction. 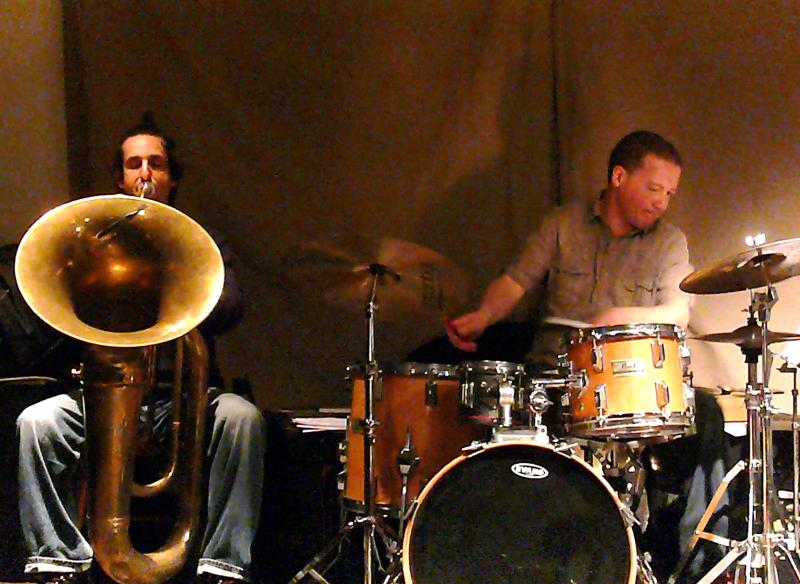 Hawkins routinely pays homage to the early 1970s loft jazz movement, by covering unexpected classics from the era among his own pieces in the program. Tonight was no exception. As well as the aforementioned Braxton composition, there was a standout rendition of saxophonist Arthur Blythe's "As Of Yet" from 1977's The Grip (India Navigation) featuring a cello, tuba, and drums rhythm team. At that point in the program is where the thought that maybe this lineup did have antecedents, after all, started to take hold.

As Hawkins explained later by email: "My thinking about the instrumentation was that the concept behind the original instrumentation was to crowd the same range of notes with as many different tone colors as possible—so that lower-mid range, with steel pan, cello, guitar, bass, piano—with this new instrumentation, I thought I would try not to pay any necessary attention to range (although the low/low-mid thing is still there!), but instead, to have 'one of everything': brass; woodwind; piano; guitar; tuned percussion; untuned percussion; string. And if asked to pinpoint my thinking about tuba, I'd probably be thinking about very early Ellington more than anything else. However when I was first thinking about the group a few years back, and I thought about 'cello: it was because of Abdul Wadud on all the Arthur Blythe, Julius Hemphill records, etc. And then I thought that I loved guitar plus cello (again, thinking of Kelvyn Bell/Brandon Ross etc. in those groups...) And then, when it came to needing to replace Dom (Lash), I realized that I had the chance to piece together that complete instrumentation from the Hemphill soundworld—guitar/cello/tuba/drums!" 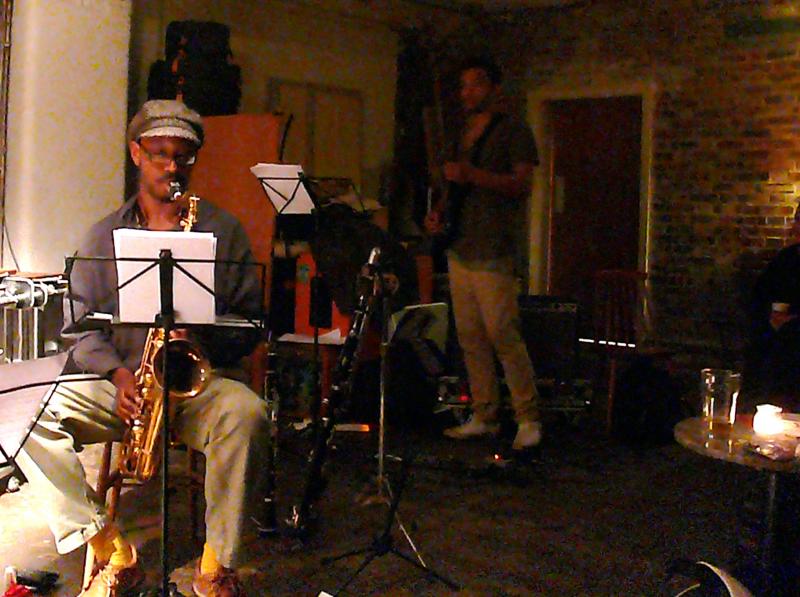 After a incremental start, the band hit a barnstorming groove. Marshall's tuba held down the nagging bass line with Sanders right in the pocket. It proved a good vehicle for BBC Radio 3 New Generation Artist Hutchings to strut his stuff, moving from long, bleating tenor exhortations to culminate in overblown shrieks attended by Robinson's fiercely abstract marimba comping. Thereafter the riff disintegrated into a round of collective activity, with sawing cello and pummeling piano, before the tubaist resurrected the insistent motif, digging in deep until Hawkins cued a sudden halt, apparently mid-flow.

There was to be one more piece and the contrast couldn't have been greater. Hawkins introduced it as a ballad from the original lineup's second CD (forthcoming on the Babel label), following their well-received No Now Is So... (FMR, 2009), but in fact it was an almost minimalist meditation which served as a sobering cooling off after the preceding exuberance. Spare piano fingerings, almost inaudible cello and subliminal guitar were interspersed with extended pauses, during which any audience other than the respectful Oto crowd would likely have burst into applause believing the song over. There was so much air that there was barely a theme at all, with Hawkins' piano accompanied by the merest squeaks and breaths. It was the antithesis of an encore, but once again signaled a strong conception, which is going from strength to strength. What do you do when two mainstays of your band leave? Move to the next level.