Alex Chilton: Roots In The Sky

By DOUG COLLETTE
April 20, 2019
Sign in to view read count
Even (or perhaps especially) if Alex Chilton had lived to a ripe old age rather than passing prematurely at the age of fifty, his post-Big Star stylistic expeditions would've garnered more than a little attention. His history as an original member as one of the earliest progenitors of power-pop certainly would've piqued curiosity about such projects as Songs From Robin Hood Lane and From New Orleans to Memphis, if only because each represents as exploration of roots that goes back further than the British pop influences at the heart of the band he joined after leading the Box Tops to some success as lead vocalist on "The Letter." Hopefully the abiding interest that compels the release of such recordings as these and the previously- issued A Man Called Destruction (Omnivore, 2017) also leads to deeper and wider investigation of the genres that gave birth to them and, by extension, the modern stylistic pursuits of Big Star. 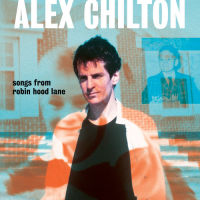 In its own way, Songs From Robin Hood Lane isn't all that different than the retro approach of Big Star, but with two marked differences: the songs are not original compositions and they virtually all derive from an era when tune-smiths like Cole Porter reigned supreme. Yet even on comparatively contemporary readings such as "Don't Let the Sun Catch You Crying"— recorded with some success by Gerry and the Pacemakers during the invasion of English bands following The Beatles' breakthrough in the early to mid-Sixties—Chilton brings a certain arch irony to his interpretations of standards evoking his own childhood (though perhaps not for listeners only familiar with his Seventies work). He's not exactly tongue-in-cheek (or merely dutiful) as he croons "There Will Never Be Another You" or "My Baby Just Cares For me," but he's arguably as irreverent as he is respectful. The acoustic-guitar simplicity of that latter tune and "Let's Get Lost" reaffirms an emphasis on well-wrought melody (rendered plush through Scott Anthony's mastering) perhaps the overriding theme to a twelve-track collection collated from previously-released works of Chilton's circa the Nineties, combined with never-before-heard exhumations from the vault. 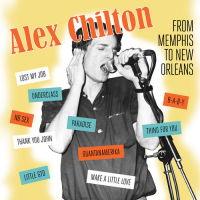 Alex Chilton
From New Orleans to Memphis
Bar None Records
2019

As much of a labor of love as its companion piece, From Memphis to New Orleans is an earthier, more high- spirited endeavor, like the other title, amassed from various sources. Emphasizing funk over sentimentality, there's also a fun-loving attitude permeating these fifteen tracks right from the horn-punctuated opener "B-A-B-Y." Singing a cut such as "Thank You John," Alex Chilton sounds unencumbered by any thoughts of performing such songs correctly (sic) and that stance furthers the accessible quality of these recordings from the Eighties completed upon this artist's move to New Orleans. Meanwhile, the prominence of electric guitar here (in lieu of saxophone) furthers the grooves Chilton's accompanists establish on tracks like "Take It Off," cuts that, in the three-four minute range slightly longer than on the other Bar None release, proceed in economical if not rapid-fire succession. The comparatively smoother, polished likes of "Thing For You" hardly belies an impression this is a kind of music so evocative of time and place, this influential musician/composer might well have made it earlier in his career, before leaving his hometown in Tennessee, had his career path gone in a slightly different direction.

Tracks: Don't Let the Sun Catch You Crying; My Baby Just Cares For Me; Save Your Love For Me; There Will Never Be Another You; Let's Get Lost; Like Someone In Love; Look For The Silver Lining; All Of You; Frame For the Blues; Time After Time; What Was.

From New Orleans to Memphis

Tracks: B-A-B-Y; Thank You John; Lost My Job; Paradise; Underclass; Let Me Get Close To You Thing For You; No Sex; Guantanamerika; Make A Little Love; Nobody's Fool; Little GTO;Lonely Weekend.