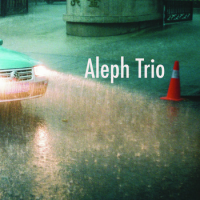 Guitarist Ben McDonnell's Aleph Trio takes its name from a story by Jorge Luis Borge involving a poet who "discovers a point in space which contains all other points." Aleph Trio, likewise, explores and exploits all points present within McDonnell's compositions on its self-titled debut EP.

Cyclical thoughts, complex colors, light and airy textures, and dark and brooding pathways are all present during this brief and compelling production. Some of the music is episodic and kaleidoscopic in nature ("The Ghats"), while other pieces are built around the idea of the ever-looping pattern or progression; McDonnell keeps the ears guessing where he'll go, and that proves to be a good thing.

McDonnell, bassist Ben Bastin and drummer Chris Packham all have a knack for light-touch playing ("A Walk In The Rain"), but take the knives out at the right time(s) ("Rue St. Dennis"). Bastin and McDonnell demonstrate a strong connection, whether supporting one another or engaging in musical discourse ("For Pa"), and Packham provides whatever is needed in a given scenario; sometimes that's a gently propulsive ride pattern and other times its a choppy and intense over-a-vamp solo. All three musicians always put the music before themselves, but they each get plenty of opportunities to shine.

These pieces, in general, could best be described as rhythmically and harmonically- charged mood paintings. Strong melodic content is of less importance to McDonnell than overall structural integrity, group interplay and the act of musical storytelling, but the music doesn't forsake melody altogether; melodic undercurrents are always in motion. McDonnell knows where he's going and where he's been, and he uses the Aleph Trio to explore that future-meets-past duality to the fullest.

A Walk In The Rain; Rue St. Dennis; For Pa; Dulcamara; The Ghats.