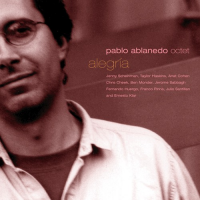 Quick and to the Point: Thriving emotive and intelligent musical richness.

In the photo included with Alegría, the Pablo Ablanedo Octet resembles a nerdy and decidedly square bunch. Their music, however, has no equal in the market, patterning highly urbane musical concepts and compositions, coupled with advanced ensemble work and superior performances from all musicians. The leader’s ethnic background is unmistakable, although one must leave any preconceptions about the possibilities afforded by such a coalescence of jazz, classical and Argentinean popular, folk and cultured music.

On “Una Más,” or “Another One,” there is a latent urgency experienced through an increasing degree of intensity. Pairing the writing with highly effective tension and release sections of attractive percussive coloring leads to a highly versatile and forward-looking drum solo by Franco Pinna, whose earlier lardy playing with the bombo legüero introduced an extended solo passage by the excellent Taylor Haskins on trumpet. The latter has superb control of his breathing, a breathy tone with ample emotive, harmonic, melodic and rhythmic data to process the complexity that characterizes this remarkable production and its distinctive sound.

Being Argentinean means that Latin American aesthetic surrealism and the characteristic penchant for melancholy will rank high in the harmonic and melodic structures of Ablanedo’s compositions. On both “Coral” and “La Procesión,” respectively meaning “Chorale” and “The Procession,” there are extended ruminations of brooding nostalgia that amaze in interest rather than bog one’s emotions down. One can actually see and feel the procession inching slowly towards their unidentified, yet instinctively known destination. Harmonically and melodically privileged playing characterizes both of these humane and stately pieces.

“La Vida Sigue” (“Life Goes On”) has a most celebratory head which sets the overall impetus and flow of almost 11 minutes of silky exuberance. Jerome Sabbagh shines on reeds with impeccable technique, loads of heart and soul, and loaded lines of thought. Ablanedo and Haskins also play a vital role in pulling off a vehicle for conveying the binding dance of the living. The pianist’s classical chops come to the fore when heeded by the composition; yet, before you even realize it, you are enveloped in a boppin’ mid-passage kept pulsing by Sabbagh until released by Ablanedo’s passage of beauty and reflection. Just like life...

The Pablo Ablanedo Octet merits many other words of praise, including a more rigorous comment on Jenny Scheinman’s impressive violin work, the remarkable arrangements and compositions, as well as the endemic capacity for the tunes to embody their thematic outlook. Together and on their own, these musicians are simply impressive, as this is challenging material that demands restraint, good taste, discipline, an expansive expressiveness and technique that can only be gained through experience.

Visit www.pabloablanedo.com on the web.