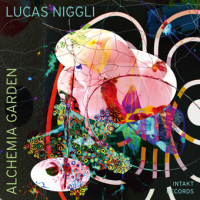 Powerhouse Swiss drummer Lucas Niggli augments this solo effort with ethnocentric percussion instruments, that largely emphasizes his well-rounded musical approach. He draws inspiration from his gardening hobby, classical composers and fellow countryman, drumming great Pierre Favre. As a leader and collaborator, Niggli's longstanding affiliation and extensive discography with this pioneering Swiss label features a cavalcade of genre-busting endeavors. The artist has recorded with the likes of New York experimental guitarist Elliot Sharp and Chinese zither performer Xu Fengia along with his Zoom and Big Zoom bands amid alliances with many Euro-jazz notables.

Niggli does not simply bash his drums or executes one drum solo after another. Instead, he angles his scope of attack with broad tonal ranges, melodic toms patterns and nouveau tribal expositions during many of these concisely enacted tracks. Sure, he engineers a host of polyrhythmic frameworks, using small percussion apparatuses constructed from wood and metal and a wide spectrum of cymbals. Niggli balances ricocheting effects with precision-oriented grooves, introspective world music-like interludes and ornamental shadings.

The drummer gives himself some latitude to expand and contract on "Tuned Arrow," where his gong hits project a transcendent background that is somewhat detached and provides depth, countered by his nimble bells and low-pitched drum articulations. Here, Niggli elicits imagery of exploring a newfound cave somewhere in an unexplored remote wilderness. Yet "Ooze," is characterized with strumming and scraping sounds, presumably using exotic instruments from Asia or Africa. Other movements are designed with shakers and tambourine style implements via sound-shaping jaunts that signal notions of ancient rituals or at the very least, a sense of antiquity. Thankfully, Niggli opts for a harmonious line of attack as each piece stands on its own, although there are some movements where he launches full-blown aerial assaults on his kit.