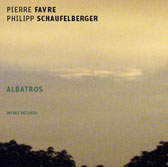 A sense of "music-minus-one" is pretty pervasive on Albatros. Regardless of what instrument is played, the presence of an additional musician might have elevated the music and the discourse from which it springs, to a more ear-catching level than that attained by this configuration of musicians. As it is, this duo of guitar and drums is marked by perfunctory air.

The waddling progress of "Pino Caro" seems faintly contrived, while "Seeing"—all three-and-a-half minutes of it—is heavy with the fragrance of what might have been, as the duo conjures an air of contradictorily unsettled solemnity.

"Poete Maudit" is shot through with a kind of unease, but Schaufelberger's string vocabulary is fundamentally different to that of someone like Derek Bailey who, in such a circumstance, would have brought his spiky and highly singular approach to bear. Schaufelberger also quotes the melody of "All The Things You Are," albeit only in veiled fashion, which only sounds like a significant drop in inspiration.

"Contrails" summarizes just how polite this duo is, evidently setting itself limits with numerous qualms about getting outside of them; hence, the linearity of this piece figuratively taking place beneath a barely agitated surface. Oddly, the impression is reinforced by their ability to finish together—as though, by a nod of the head or some other gesture, they concluded that they'd squeezed all the possibilities out of the moment.

"Light-mantled" is, at least, something more than surface. Indeed, it's what's going on beneath that's its most intriguing element. Schaufelberger's ever-correct technique reins the music in, even while its flow is intriguing—not least because, in his contribution Favre offers a reasonable summation of a musician listening intently, even while carrying on in a way that suggests he's ignoring his partner's playing.

In closing things out, "One Woman Concert" ups the intimacy quota, as the duo sets about the task of denying impetus. The near static result is intriguing, but once again heavy with the promise of what could have been.