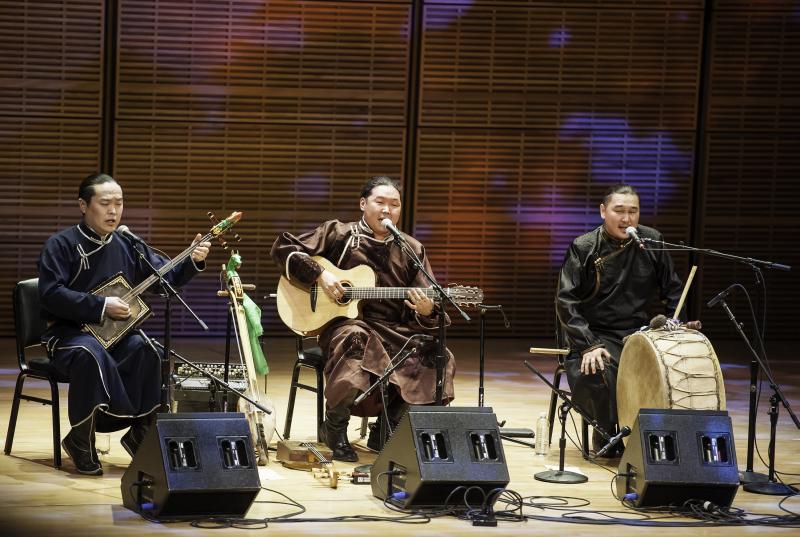 Carnegie Hall's late-night weekend series of shows always have a livelier atmosphere than their earlier 8:00 p.m. concerts. Typically a gig will begin down in the subterranean Zankel Hall at 10:00 p.m., continuing until almost midnight. It always seems as if the audience is geared up with energies already accumulated during their night's earlier activities. The only potential negative side effect of this situation is the increased likelihood of an early leave-taking minority. The appearance of Alash, a Tuvan trio of throat-singing minstrels, represented one of Carnegie's more adventurous bookings. This wasn't late night weekend party music. Or maybe it was, considering the band's predilection for a cantering momentum, inspired by the dominant nature of equine culture on the wintry steppes.

Alash takes its name from the river in the northwestern part of Tuva in southern Siberia. Undeterred by the incineration of its bull-testicle percussion instruments (xapchyk) by the Logan Airport authorities, the trio still kept hold of its almost-as-unusual core instruments. Bady-Dorzhu Ondar, Ayan-ool Sam and Ayan Shirizhik shuffled around their armory of igil (a two-stringed bowed instrument), (banjo-esque) doshpuluur, bayan (Russian button accordion), shoorlar (flute), plain old guitar and a host of non-scrotal percussion items. The stringed instruments are designed to mirror the multi-toned nature of the singing. Though a mere threesome, the comparatively lengthy set of almost two hours was continually refreshed by different instrumental setups and differing densities of delivery. Many songs were gently rolling, but were frequently interspersed with pieces operating within a more dispersed drone landscape.

Our host for the evening was Sean Quirk, an American who has now completely devoted himself to the Tuvan way of life, residing there for the last decade. He balanced carefully between being gently intrusive and helpfully informative, filling his explanations with humor. The background information wasn't too populist, but also avoided being overly technical on the ethnomusicology front. For the hardcore global music enthusiast, there have lately been numerous opportunities to experience the music of the Tuvan and Mongolian regions, but for many in the audience a guiding light must have been useful. Quirk joked that most of the songs concerned either beautiful girls or fast horses, becoming confused between the two, twisting them into beautiful horses and fast girls...!

Most of the songs in the program were traditional, but even if they weren't, the presentation and instrumentation made them sound as if they were. The stories are in thrall to the nomadic Tuvan lifestyle, with "Yrlaazhyyly" detailing how youngsters will transcend the loneliness of the road with a spontaneous gathering in a secret location. The three sonorous voices worked exceptionally well together, as frequencies resonated within mouth cavities, sounding somewhat orchestral when the singers were each producing multiple tones. This performance wasn't quite as crowded as most of Carnegie's late-nighters, but the audience was no less vociferous in its enthusiastic embracing of these comparatively alien sounds.

Singer Skye Edwards appears to have dropped her surname in the quest for an even more enigmatic persona. She's renowned to most as the singer with English trip hop combo Morcheeba, which was actively touring as recently as 2011. Edwards' solo stance involves a closer mingling with rock, soul, funk and even pop stylings, though always gratifyingly infused with her highly stylized and individual vocal tones. Backed by guitar, bass (Steve Gordon, co-writer and husband) and drums, she favors a classic set-up, though there were still layers of string effects that implied the sonic spread of a keyboard.

Yes, this material is blatantly courting commerciality, but Skye Edwards' singular presence subverts the regularity just enough to lend deeper interest. Her persona manages to fuse statuesque posing with an offhand, naturalistic delivery. One moment she'd be gracefully throwing shapes with her blue glow-rings, one on every finger, or pretending to be a swan, flicking her feathery shoulder-fringes, the next she'd make a debunking remark to highlight the ludicrous nature of showbiz. Before too long, she was hurling those rings out into the audience. At times her vocals were obscured too much by the guitars, and she was heard most impressively when the strings receded and her voice operated down at the deeper end of her range, allowing a wider framing space.

The inclusion of Blondie's "Call Me" came as a welcome diversion, but then a descent into the Justin Bieber songbook shocked in a different way. Edwards was seemingly taken aback by the crowd's verbally expressed horror at this transgression. Ultimately, folks always say such things as this about post-famed-band solo careers, but the songs were nowhere near as unique as the pieces of yore penned with Morcheeba. The singer mostly transcended this problem through sheer vocal power and the strength of her performing personality. With the recorded listening experience, in a private living room, we might not be so fortunate.

Quest has now become a regular visitor to Birdland. The veteran group of Dave Liebman (saxophones), Richie Beirach (piano), Ron McClure (bass) and Billy Hart (drums) has the distinction of possessing a sound that's toughened by an electric fusion sensibility, even though the setup is completely acoustic. Its approach is beyond sturdy post-bop, but not so out-there that it's going to alienate the jazz core. Quest is teetering on several edges. This is a band with a three-decade history, although much of that time was spent apart.

The group's innate rapport has survived intact, particularly as it has now been regularly reunited for eight years. This late set on a Friday night found the quartet no less energized, surrounded by a medium-sized gathering intent on a rigorous journey. For the opening "Pendulum," drummer Alex Ritz sat in, with Liebman blowing a brawling tenor, then switching to soprano for "Knowinglee."

When Liebman picked up his small wooden flute to begin Ornette Coleman's "Lonely Woman," it was assumed that he'd subsequently switch to one of his saxophones. Instead, Liebman negotiated the entire number with an astounding display of precise sensitivity, finely poised at every stage of the tune's steadily rising emotional curve. Fragile notes struck deep with an icy poignancy. Bobby Avey took over the piano stool for an explosive trounce through Wayne Shorter's "Footprints," diverting the theme far away from any sense of over-familiarity. It was some achievement to transcend this drama with a bout of tenor-and-drum violence during the climactic "Paraphernalia." Liebman, in particular, delivered every solo of this robust set with a sense of inflamed urgency, with the entire quartet repeatedly locking into a magical sequence of communion, its members looking like they were repeatedly surprising themselves as they headed down excitingly unexpected avenues.