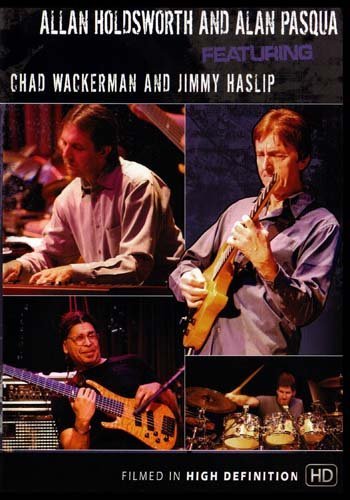 2007 is the year that guitarist Allan Holdsworth makes a return to the public eye. With planned reissues of his long out-of-print discography and more extensive touring than he's done in years, this groundbreaking guitarist—long considered an icon by fusion fans and a guitarist's guitarist by other equally legendary six-stringers, including Pat Metheny and John McLaughlin—may finally be poised for the greater recognition he's always deserved.

In the fall of 2006, Holdsworth reunited with keyboardist Alan Pasqua, with whom he first worked in the late drummer Tony Williams' mid-'70s New Lifetime band. While that group released only two records, the first—Believe It (Sony, 1975)—is considered a fusion classic and features two especially enduring tracks, Holdsworth's "Fred and Pasqua's "Protocosmos. Both are included on Allan Holdsworth and Alan Pasqua featuring Chad Wackerman and Jimmy Haslip, filmed at Oakland's Yoshi's club at the end of September 2006. Given Holdsworth's long relationship with drummer Wackerman, bassist Haslip is the only new face here, though as co-founder of the popular contemporary jazz group Yellowjackets, he's by no means an unknown entity.

The DVD captures 85 minutes of material old and new. Holdsworth has sometimes been his own worst enemy, so self-critical that albums like Soft Works' Abracadabra (Tone Center, 2003), his collaboration with other alumni from '70s British jazz/rock group Soft Machine, ended up being far less than it could have been. The playing was never less than stellar, but equally it often felt a little sterile.

There's no danger of stasis here. Without the benefit of fixing and remixing, Holdsworth fans get to hear him warts and all—not that there are many to be found. His remarkable legato style, almost entirely eliminating the attack of his guitar, is in full force, but with his signature vibrato and tasteful use of whammy bar, this is the most energetic he's sounded in years. There's more attitude and less self-absorption, and it's a welcome change. Holdsworth's other concert DVD, Live at the Galaxy Theatre (Gnarly Geezer, 2002), suffered from a similar self-absorption as Abracadabra, whereas here, while he rarely cracks a smile, it's clear he's enjoying himself.

And how could he not? Wackerman, with the exception of Gary Husband, has long been Holdsworth's drummer of choice. Here, with a group that's in some respects paying tribute to the New Tony Williams Lifetime, Wackerman demonstrates the same paradoxical mix of power and finesse that made Williams such a potent and diverse musical force. He cops Williams' drum intro to "Fred, but after that one reference he's playing on his own turf. Capable of strong, propulsive grooves while responding to everything going on around him, he's busy at times but never superfluous or excessive. In fact, that's a defining characteristic of the entire show. There's plenty of high velocity playing going on, but it's all meaningful and purposeful, never the kind of aimless wanking that often gives fusion a bad name.

Haslip, like Wackerman, seems to know just how to balance energetic playing with sustained groove. Before Haslip became a known entity he was a progressive rock and fusion fan, so playing with Holdsworth may well be something of a dream come true. But at this point in his career he's absolutely an equal. His solo on the opening "The Fifth has the punch of Stanley Clarke but none of the self-aggrandizing ego that has shadowed Clarke for far too long. As it is for everyone else on the stage, the music is the thing, and while Holdsworth has worked primarily with Jimmy Johnson over the years, there's an undeniable chemistry with Haslip here that deserves further exploration.

Pasqua has, in recent years, been working in a more acoustic space. He's a member of drummer Peter Erskine's trio, and has released his own elegant piano trio disc, My New Old Friend (Cryptogramophone, 2005). Here, however, it's clear he's lost none of his fusion chops, or his ear for texture. While the majority of the time he's heard using either a Hammond-like organ tone or Fender Rhodes-like electric piano sound, he kicks in some serious distortion on a couple of tracks, including the funky closer, "Red Alert, and demonstrates he's as capable of near-relentless intensity as the rest of the group.

It's not all unrelenting, however. Holdsworth's intro to "Pud Wud is atmospheric, again demonstrating his unique voicings and a unique lyricism. Once the band is in the pool, it's a return to greater energy but also a change of pace. "San Michele features a beautiful piano intro from Pasqua that leads into an arpeggio-driven group piece that's reminiscent of early Mahavishnu Orchestra but, with Holdsworth's legato lines, a cleaner and less audacious version.

While it's a shared bill (and rightly so), the chance to see and hear Holdsworth live is the main attraction. Sporting both stereo and 5.1 surround mixes, the sound leaps out of the speakers. With seven cameras, some might suggest that there's a little too much jumping from shot to shot, but there's no shortage of opportunity to watch everyone at work. There's plenty of focus on Holdsworth, delivering his lightning-fast and visceral runs that seem nearly impossible to conceive let alone play, and producing his unique chord voicings that are equally difficult to fathom. There's a reason why Holdsworth has often been imitated but never copied, and any guitarist watching this DVD will see why. Holdsworth's hands simply don't fall on the instrument the way most guitarists' do.

This group will be hitting the road at various times throughout 2007, and Holdsworth will also be touring with a power trio of Wackerman and Johnson, so fans old and new will get a chance to catch him in a live setting from which he's been absent for far too long. The Holdsworth concert DVD that's been long overdue, Allan Holdsworth and Alan Pasqua featuring Chad Wackerman and Jimmy Haslip is just the warm-up: the best is undoubtedly yet to come.

Tracks: The Fifth; Looking Glass; Fred; It Must Be Jazz; Blues for Tony; San Michele; Pud Wud; Protocosmos; Red Alert.