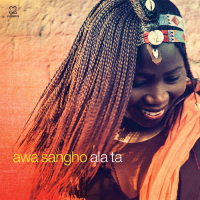 The ancient West African culture that spans across the sands of the Sahara has created a rich and vibrant musical legacy which continues to yield stimulating artists. Vocalist Awa Sangho hails from Mali, was raised in musically rich Bamako, and began her singing and composing career in Abidjan, in the Ivory Coast. There she honed her skill in a theatre troupe before forming her own group Les Go De Koteba, which released five records and toured internationally. With her release of Ala Ta, Sangho joins the ranks of strong African women which are making a positive impact on the world music scene while maintaining their ethnicity intact.

Sangho is a remarkable singer songwriter whose compositions are a personal journey of discovery, faith and appreciation. The title track which translates into the truth belongs to God, sets the tone for the record as one which is profoundly reflective presented with pure African rhythmic spendor. This strong religious belief is also present in "Danfin," acknowledging that we all have the power to create and radiate change. "Neba Nifa," dedicated to her parents, is one of several tracks revolving around the family structure as are "Denko," dealing with the education of African children, and "Nangaraba," instills cultivating positive images and confidence in young girls.

The record also displays the diversity which is prevalent in African music, as any given region has its own distinct musical nuances. Sangho travels to the forests of Guinea in "Emama," a tribute to her ex-husband and mentor. "Dofana," is done in honor of Ali Farka Toure, the legendary Malian musician who continues to cast a long shadow in Western Africa. The instrumental numbers of "Tambin y Tambor," and "Ndjarka y Tambor," feature her percussionist and producer Daniel Moreno, who did a commendable job in gathering the appropriate musicians to capture the spirit which the vocal styling of Sangho invokes.

The utilization of native instruments as ngoni, kora, balafon, dun-dun, and n'djarka, are essential in obtaining and maintaining the folkloric authenticity from which this music spawned. Ala Ta is Awa Sangho's first release, culminating from her recent relocation to America and backed by a supportive label as Motema. She offers a modern approach to her ancestral muse, and she is indicative of the encouraging performers coming out of the African motherland in a creative exodus.