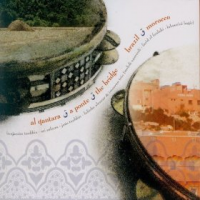 Music, by its nature, is about building bridges. When it's broken down to its very essence, it's all about forming connections between sounds and souls. That idea, in expanded and magnified form, is the core principle behind Al Qantara/The Bridge. Here, music takes on additional responsibilities, serving as a bridge between styles, syntax, and cultures; it serves as a binding agent between Brazil and Morocco.

In 2009, Brazilian pianist Benjamin Taubkin was invited to perform at the Timitar Festival in Morocco. That experience awakened his interest in music from that country. Thirsty for further exploration, Taubkin came up with the idea to put on a concert that brought Brazilian and Moroccan musicians together. He gathered some Brazilian players, and Brahim El Mazned, who had invited Taubkin to perform at the aforementioned festival, served as contractor on the Moroccan side. The concert turned out to be a great success, so the musicians reconvened a year later to record this album.

While Taubkin and friends create something unique and special by bridging the gap between these two realms, it should be noted that this isn't a 50/50 blend of cultures. It's a study in sonic climate change, observing what happens to Moroccan music when Brazilian musicians are introduced into the atmosphere. Those expecting Moroccan-spiced samba, bossa nova or choro music won't find it here. Instead, Taubkin brings a sense of openness to the other side of the table. His lone compositional contribution—"O Deserto E Aqui"—serves as the strongest example of what can be accomplished in this type of meeting. Shadowy lines, reflective asides, and a fine balance between musical migration and repetition help to make this a compelling listen. Vamps, whether serving as transitional material or a foundation for stacking ("Hamdouchia"), find their way into a good amount of this material. The music can be cheerful and carefree ("Salsabile") on occasion, but a sense of mystery is really the overriding theme in this work. It's the certainty of uncertainty that carries the day on Al Qantara/The Bridge