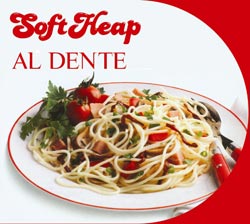 With the exception of drummer Pip Pyle this is the group that recorded 'Rogue Element' (Ogun) in May of 1978. On that occasion the drummer was Dave Sheen and the group was known as Soft Head, which offers a clue as to how the name was arrived at, particularly in view of the presence of Soft Machine alumni Elton Dean and Hugh Hopper. Keyboard player Alan Gowen, a musician as undervalued as the British Steve Miller, rounded the quartet out and his compositions as much as anyone's helped to give the music an identity all its own.

Captured for posterity in November of the same year, the music on this live set rolls and boils in a way it didn't with Sheen behind the drums. What emerges overall is a common group dynamic with seemingly multiple facets. On Gowen's "Remain So" this is all too obvious in the form of Pyle's rolling thunder, hinting as it does at rhythmic possibilities which, whilst they weren't explored on this particular night, might well have been the night before or after.

The reflective nature and harmonic individuality of Gowen's compositions is highlighted by "Sleeping House" until Dean takes flight in particularly incendiary fashion, pushing at the line without being assertive to the detriment of the music. The work and interaction of Gowen and Hugh Hopper is notable on this one, with both men taking what might be called a negligible line by comparison with the interplay between Dean and Pyle. The collective end result is so much more than the work of a band that merely came to play and the listener's ear accordingly gets a good workout.

Whoever the dedicatee of Dean's "One For Lee" is one can only hope they're a worthy recipient. Pyle here is the epitome of the shuffle boil that Thelonious Monk might have had in mind when he gave his piece that title, and the cyclical figure that Hopper plays has the effect of grounding the music while Dean takes flight again on his saxello. When Pyle comes back to that figure and Gowen sketches out the harmonies it serves notice of how form can be infinitely malleable in the right hands. It's also the kind of blast that seems to make every day cares melt away.