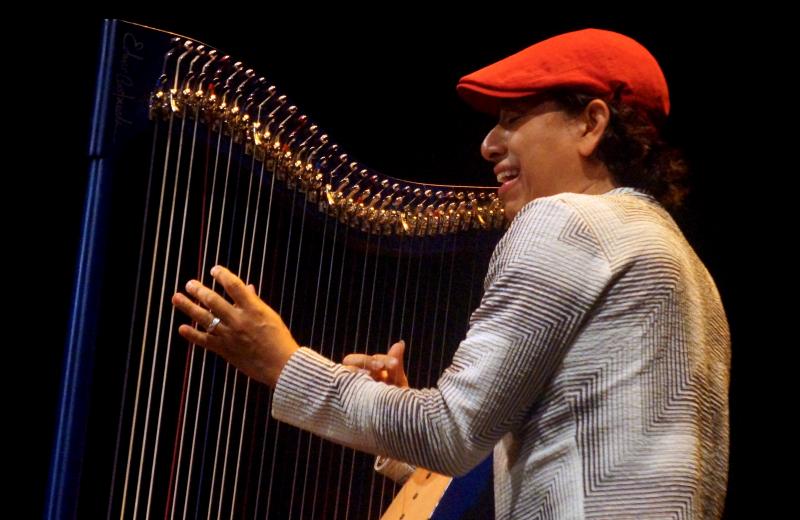 Despite the city’s reputation as the capital of Colombia’s salsa scene, there is scant evidence that the local festival has embraced this variant of often jazzy, rhythmically-potent Afro-Caribbean dance music.

September is jazz festival month in the South American nation of Colombia. Four major cities—Bogotá, Medellín, Cali and Barranquilla—and Pasto, a smaller provincial municipality—stage well-oiled multi-day events stocked with international and regional jazz talent. The five festivals work collaboratively to bring major artists to the country, allowing them to perform in more than one locale on the same tour. Yet each festival is known for its own stylistic orientation. Medellín and Barranquilla are heavily oriented toward Latin jazz, salsa and Cuban groups, while Bogotá, reflective of its cosmopolitan urban character, favors a more mainstream approach.

Cali, the country's third largest city, likewise boasts its own unique spin on jazz festival programming. And, despite the city's reputation as the capital of Colombia's salsa scene, there is scant evidence that the local festival has embraced this variant of often jazzy, rhythmically-potent Afro-Caribbean dance music. The slogan of the annual AJAZZGO series of concerts—"An encounter of experimental and fusion jazz creators"—says it all, except that the "fusion" in this case celebrates the myriad blending of music idioms that have evolved in the region and not "smooth jazz." Cali's festival is anchored by several pricy, showcase concerts that are presented in the city's century-old, Italian-style opera house and feature high profile artists. Curiously, the Teatro Municipal concerts are preceded by a recording of Cali's official municipal anthem, during which patrons stand reverentially and sing along to the composition's martial strains.

This year the duo of Japanese pianist Hiromi and Colombian harpist Edmar Castaneda and two renowned Cuban pianists—Jesus "Chucho" Valdés and Omar Sosa and their groups— opened and closed the six-day festival. In between, less formal performances and workshops, offered at little or no expense to festival patrons, featured lesser known but nonetheless artistically accomplished national, regional and international musicians.

The AJAZZGO festival, entering its 18th season, is largely the brainchild of Diego Pombo, a former musician and famed painter who serves as the event's artistic director. The bearded and bespectacled artist featured a collection of his jazz and music-themed paintings in an exhibit hall adjacent to the municipal opera house. Pombo's signature style builds on the formality of the posed group settings from the early days of jazz in a tropical-surrealism incarnation that incorporates subtle— often coyly hidden—references that range from the devil himself to Simón Bolívar, Colombia's most revered national hero. Pombo's style is ravishing in its bold color scheme and sensual, tropical character. Several examples are included in the Slideshow.

The duo is currently on a wide-ranging international tour in support of their new album on Telarc, Live in Montreal. The interplay between the two musicians, brimming with spontaneity and genuine emotion, is the key to their chemistry. Hiromi occasionally plucked the strings of her grand piano, producing the impression of two harps on stage. The ebb-and-flow of their improvisations and charismatic stage presence set a high bar for what was to follow.

AJAZZGO highlighted several other national artists of note. In its opening slot at the open-air Teatro Al Aire Libre los Cristales, a well-designed amphitheater in the mountains on the outskirts of the city, Cununao leavened its sound with rhythms spawned by the country's Pacific Coast Afro community. Led by pianist Giovanni Caldas, a Cali native, the quartet featured such regional percussion instruments as the bombo, a drum played with a mallet and a stick. Rhythmic passion and a sophisticated approach to ensemble playing showcased Caldas' haunting compositions. Saxophonist Jacobo Vélez, another local jazz pro, sat in and provided vivacious solos.

Sultana Club and Kuattro Ensammble, two other Cali-based groups, were featured at the city's Comfandi Cultural Center concert space. The four-member Ensammble proved to be one of the festival's most entertaining groups, making extensive use of indigenous percussion instruments and doubling on a variety of instruments. Dressed in white pants and white shirts and sporting loose-fitting neckties, the unit's three male members even changed hats as their program transitioned from one folkloric tradition to another. Trombonist Diego Tovar blew long, spicy solos—moñas—over the churning rhythms. Vibraphonist Katerine Ortega doubled on percussion and added orchestral depth to the arrangements thanks to her four-mallet comping. Bassist Francisco Alvarez and percussionist Fabian Sánchez were flush with piquant rhythmic details.

Cali-born Diana Arias, a young double bassist, was featured as a member of Argentine pianist Ernesto Jodos' trio. Jodos a standout personality in Buenos Aires' large jazz colony, is known for his cerebral approach to soloing. His pensive and melodically-charming compositions were warmly received by a full house in the Centro Cultural Comfandi. Playing the upright double bass, Dias was often the catalyst for the trio's explorations, laying down intricate ostinatos that anchored the spirit of Jodos' probing, inquisitive works.

During a workshop featuring the trio, I asked Jodos about a recording of his I'd recently discovered—a trio date from 2007 featuring the compositions of Lennie Tristano, Lee Konitz and other bebop icons. To these ears, Jodos' transformation of Tristano's quirky "Two, Not One" offers a profound illustration of the art of reinvention and focused improvisation at the highest level. Jodos politely accepted the praise, explaining to the small gathering the story behind the session and how he approached interpreting frenzied bebop masterworks and converting them into more intellectually focused arrangements for a piano trio.

AJAZZGO, like other festivals in Colombia, depends on the assistance of foreign arts foundations and governments to make appearances by national artists from abroad available. I was unable to attend performances by Israeli vocalist and guitarist Dida Pelled and Swiss trio led by organist Frank Salis and his trio, but I did catch a set by the Dutch quartet The Ploctones. Fronted by guitarist Anton Goudsmit and Efraim Trujillo, a California-born saxophonist, the band was heavily influenced by rock fusion and blues and played off a funk-rooted rhythmic drive to fashion its groove-based repertoire.

The appearance by Chucho Valdés and his Cuban quartet—bassist Yelsy Heredia, percussionist Yaroldy Abreu, and Rodney Yllarza on drums—caused a stir in the opera house. The capacity audience reveled in the pianist's bravado as he delivered his patented virtuosic performance, plush with rhythmic intensity and daring improvisations. At one point, Chucho ripped off his trademark beret-style cap, signaling an even higher level of keyboard expertise. Quotes of Tchaikovsky, Chopin, and Michel Legrand echoed through the concert hall. A solo reading of "Summertime" morphed into a furry of Afro-Cuban rhythms on the quartet's reading of "But Not for Me."

Omar Sosa, Senegalese kora player Seckou Keita and Venezuelan percussionist Gustavo Ovalles capped the festival with a relaxed and regal opera house performance that enthralled the full house. Sosa is perhaps the most unpredictable musician on the planet when it comes to creating unusual partnerships and cross-pollinating seemingly disparate genres. The blend of Afro-Caribbean and West African modes was transfixing —another triumph for the restless Cuban maestro.

One cannot say adios to AJAZZGO and Cali without recognizing the hospitality and comfort of the Cosmos Hotel, a great bargain, and Ringlete, a one-of-a-kind Colombian restaurant in a lovely post-colonial house that is one of the region's true culinary gems.