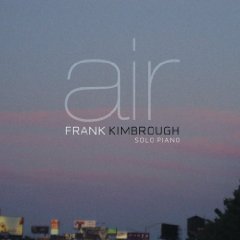 There is a haunting quality to Frank Kimbrough's solo piano record, Air. There is only one other solo piano record that has this overall effect on the listener, and that is Keith Jarrett's The Melody at Night, with You (ECM, 1998). Jarrett's program on that disc is very different—mainly ballads and standards—while Kimbrough's strikes out on a much bolder, adventurous course. Still, it remains one of the most stunningly beautiful solo piano records in recent times. The reason is that there is such soulful spontaneity, unbridled creativity and technical brilliance, that the result can hardly be in doubt.

Musical artistry is often a solitary pursuit; more so on any solo effort. Ideas echo in the artist's head, and he has virtually no one to exchange them with; to develop, have fun and run away with. The solo artist must live alone with the song, its idea and its development. And Frank Kimbrough has done a masterful job here. Not only does his program appear to have a remarkable flow—giving the record the quality of being a seamless suite—but also it appears to have that primal quality, when everything appears to be working in unison through a mysterious force that connects the artist and his art. This happens a lot with the music of Ornette Coleman, and now on this remarkable record by Kimbrough as well.

Not a wrong note is played here. Some of the songs are first takes, but it's not necessary to even bother speculating which ones they are. The sound of surprise abounds: in Paul Motian's "It Should've Happened a Long Time Ago," and in all of Kimbrough's creations, especially "Quickening," "The Spins" and the towering brilliance of "Ca'lina." Many pianists prefer to dazzle with virtuosity, hoping that reputations rest on speed and agility, but Kimbrough is a deep thinker and a gifted storyteller. His notes and expressions stick in the mind and tug at the soul, because each note, phrase or metaphor is so concrete of an image that there is no doubt of their veracity. And he can 'sing' the blue notes too; they abound on "Ca'lina."

Another test of genius is the ability to wrap his head around Monk. There are two charts here, "Coming on the Hudson" and "Jackie-ing." To interpret Monk, you have to first get it right—harmonically and rhythmically. This means odd and angular accents, perfect control of the piano's damper, where to place it in a phrase, and of course, the total construction.

Perhaps the most remarkable songs on the record, however, are "Three Chords," and "Air." The former is such a tightly controlled exercise in creativity, yet so boundless in its ability to surprise. And the latter is a tone-poem that revels in sound and silence, which seemingly comes from—as Ezra Pound would say—"mouthfuls of air."

Few do this better than Frank Kimbrough. 'Nuff said.