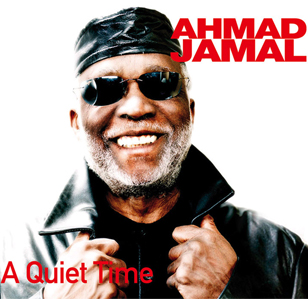 Pianist Ahmad Jamal continues his career-long winning streak with A Quiet Time. The album expands on a stream of superb, post-mid 1990s releases made with largely the same working band: the Verve label's three-part The Essence series (1996-98), followed by Dreyfus' In Search of Momentum (2003), After Fajr (2005) and the excellent It's Magic (2008), among others. Jamal has achieved living legend status by constantly evolving and refining his sound throughout these albums, going well beyond the influential work that established his unique piano artistry and innovative trio conception back in the 1950s.

Jamal's longtime bandmates, bassist James Cammack and percussionist Manolo Badrena, remain in the mix on A Quiet Time. The drum throne—previously held by an intimidating list of stars beginning with Vernel Fournier and, most recently, Idris Muhammad—is newly filled by Kenny Washington - Vocals. Despite not sounding as immediately distinctive as his predecessors, Washington is a highly skilled expert with deep swing and a driving yet subtle style.

The album features nine original Jamal songs, mostly composed since 2000, as well as versions of the standard "I Hear a Rhapsody" and fellow piano giant Randy Weston's classic "Hi-Fly." Opening with the brisk stroll of "Paris After Dark," Jamal's instantly familiar warmth emanates from the stereo, the tune's smooth groove intercut with rubato passages in a tightly controlled but loosely interpreted orchestration. "The Love Is Lost" is a waltz spotlighting Badrena's nature-influenced, coloristic playing; understated brushwork from Washington and the sinewy tones of Cammack's bass lift the song to an ultimate definition of swing.

"Flight to Russia" is full of bluesy twists, energized pursuits and escapades into strange territory, all while remaining focused in its many transitions. Washington's presence is light yet funky throughout, and the track is punctuated by Jamal's signature use of space. An exclamation point of an ending is tempered by Manolo's bell ringing out hauntingly.

"Poetry" begins as an otherworldly reverie; impressionistic, but sharp and quick-witted. Sparkling metallic percussion from Badrena captures the ear, cushioned by Washington's slippery cymbal rolls as Jamal plays some sensual blues. The band dives and spirals around a tonal center, and the ending tag—always a speciality of Jamal's bands—could be considered straight-up avant-garde. Silence, alternating with Jamal's distant rumbling bass notes, is pierced by the ghostly groans of Badrena's scraped metal.

It's a total thrill to hear the collision of two masterminds on "Hi Fly," with Jamal's interpretation of the well-known Weston theme giving a voice to the pianists' common roots and mutual respect. A New Orleans vibe is well-represented (as expected from Jamal), with a second-line vamp supporting the distinctive phrasing of the melody. Washington takes a killer solo, heightened by the comping of Cammack's heavy bass line and Jamal's twinkling, fractured patterns.

A trio of tunes keeps things on the mellow side. The delicate, bossa-flavored "My Inspiration" matches the title track's mood. "A Quite Time" has the kind of funky, slow-burning pocket that hip-hop heads like Dilla and Madlib would surely appreciate, with a double-time midsection and Badrena's jungle bird calls adding Latin flair. "The Blooming Flower" is likewise a lush tone portrait, built on a powerful bass line, Washington's mallets, and Jamal's elegant musings.

Things heat up on "After JALC," which sways with a hard-walking bass and ride cymbal feel in 4/4 that locks infectiously with a surging 6/8 shaker pattern. The form transitions to a solo Jamal section, where the pianist utilizes classical-derived techniques to get baroque and rapturous. The suite-like, multiple movements of the meditative piece suggest the long-form strategies of the Jazz at Lincoln Center Orchestra, with whom Jamal collaborated in a September 2008 concert in New York.

"Tranquility" is not necessarily a match for its title; instead, it cooks at a dynamic, medium sizzle spiced with African-infused rhythms. Revised from its original appearance on Jamal's 1968 Impulse! album of the same name, this track finds the band pulsating as one breathing organism, and concludes in a beautiful, lingering fade-out. The album closes as "I Hear a Rhapsody" is performed in a piano-bass duet. Jamal and Cammack are telepathic soulmates on this chestnut, that was originally a 1941 chart-topper for bandleader Jimmy Dorsey, and was first performed by Jamal himself on Rhapsody (Cadet, 1966).

The pianist's consistency for over 60 years—track for track, album after album—displays a remarkable individuality and integrity. As he continues his artistic progression on A Quiet Time, an engaging listen for all of its 66-plus minutes, Jamal proves again that his mastery is supreme.


Tracks: Paris After Dark; The Love Is Lost; Flight to Russia; Poetry; Hi Fly; My Inspiration; After JALC (Jazz at Lincoln Center); A Quiet Time; Tranquility; The Blooming Flower; I Hear a Rhapsody.