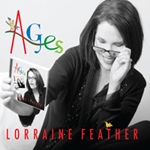 Lorraine Feather, daughter of famous jazz critic Leonard Feather, is a seven-time Emmy nominee who once sang backup for Petula Clark and Grand Funk Railroad and has released eight well-received recordings of her own, including Language, (Jazzed Media, 2008). It does not diminish her musicality, charm, or wit to say that, more often than not, Ages sounds like a "chick disc."

For example, it's hard to imagine the man who could easily identify with "The Girl with the Lazy Eye," or the one who would deliberately commit "I Forgot to Have Children" to memory. "Old at Eighteen/Dog Bowl" describes the young girl trying to make a show biz career while working as a waitress in New York City, while "Two Desperate Women in Their Late 30s" picks up their career frustration as they await the "oncoming trains" of their fortieth birthdays. In the bright and funny "Scrabble," she tries, for once, to beat her Mensa man at the game. And although "Perugia" is classically beautiful, with its haunting Mendelssohn melody and Feather's clear, pitch-perfect soprano, only listeners who were also Daddy's girls can inhabit her precise anguish as she watches her protector disappear into old age.

Since Feather writes her stories from the bone—they are often small, gleaming, autobiographical gems—it's natural that some will resonate more powerfully with women. Even when she contemplates romantic relationships, as in "How Did We End Up Here?" and "I Always Had A Thing for You" she does so from her own singular perspective—sharply intelligent, yet compassionate and humorous—which makes her songs ring absolutely true.

Having said all that, Feather continues to write some of the hippest lyrics around, and enlists only first-rate musical collaborators in their delivery, such as Yellowjackets pianist/arranger Russell Ferrante, pianist/composer Shelly Berg, banjo player Bela Fleck, and pianist/arranger Dick Hyman. From the swinging opener, "A Lot to Remember," the CD is full of catchy, varied, well-crafted tunes, and the playing throughout is terrific. One example is trumpeter Warren Luening's atmospheric weave around "Old at Eighteen/Dog Bowl," where the sign that all is well is "bebop on the radio/water in the dog bowl." Feather's voice is flawless and warmly recorded, and the CD is artfully paced throughout. All in all, Ages is another excellent collection from this uniquely talented artist.

A Lot to Remember; Peculiar Universe; I Forgot To Have Children; Old at 18/Dog Bowl; Perugia; Things I Learned in High School; Two Desperate Women in Their Late 30s; The Girl With the Lazy Eye; How Did We End Up Here?; Scrabble; I Always Had a Thing For You.