By EYAL HAREUVENI
August 27, 2008
Sign in to view read count 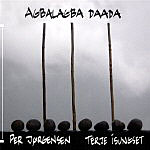 In the African Yoruba language, the title of this excellent release means "old and wise man." In a figurative manner, Norwegian, Bergen-based trumpeter Per Jørgensen and percussionist Terje Isungset gradually attained their status of Agbalagba Daada as they have adjusted and broadened their musical perspectives through the growing process of life.

Jørgensen is known from his association with pianist Jon Balke's different ensembles, but he has also recorded with composer Michael Mantler on The School of Understanding (ECM 2001) and Swedish bassist Anders Jormin on Jord (Dragon, 1995). Isungset is one of Europe's most innovative percussionists, whose musical experiments encompass traditional forms, open-ended improvisations and ice-based instrument inventions. The two have collaborated before on Isungset's Reise (NORCD, 1997) and recently on Two Moons (All Ice, 2007).

Agbalagba Daada features both artists in a set of playful and innocent open-ended improvisations, using whatever instruments were on hand, together sounding as if there were more than two musicians in the studio. The music beautifully expresses the joyful cooperative of the in-the-moment, anything-may-happen attitude, as Jørgensen and Isungset transcend genre-based musical definitions in an example of world music exploration. Jørgensen's clear, round tone and his accessible themes may draw comparisons to the late Don Cherry, but he is a highly original musician with many surprising ideas of his own. Isungset never surrenders to the obvious and always invents new ways to present the rhythmic aspects of these improvisations.

All the pieces have their own simple sense—sometimes wild and noisy ("Punch Simulator") or meditative and ceremonial ("Jugalbandi"), while the tabla references an imaginative Indian rhythm. "Agbalagba... Another Essential Story" features Jørgensen and Isungset as master storytellers who develop elements of drama, mystery and surprise, and tension and suspense, culminating in a fast tribal coda. "Dark Comfort" is an ambient piece that suggests the influence Jørgensen has had on younger generations of Norwegian trumpet players including Arve Henriksen and Mathias Eick.

"Togna" finds Jørgensen exploring an enchanting melody on kalimba, and adding expressive vocals while Isungset broadens the envelope with the gentle sound of bells. "Circle Completed" is a spare, spiritual duet between Jørgensen's long lines and Isungset's earthy sounds that answer the trumpet calls. "Lonely Trumpet... Unfold... Unfolds..." may be the jazziest piece in its linear structure, even though Isungset refreshes with his idiosyncratic rhythms, augmenting it with some noisy toys. The concluding "Waltz of Hopeless Day" is a silent prayer, with Jørgensen on piano and vocals, as Isungset creates a meditative atmosphere with natural elements including wind and stones.