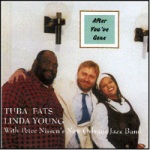 It is a testament to the players on this session that the music on this disc never feels the least bit cluttered. Considering the personnel on these sessions (usually drums, tuba, piano, and three reed players), the sound is remarkably light and airy, with each player contributing just what they need to, and no more. This is truly group music, and though it may be billed to Lacen and his wife, singer Linda Young, neither of them is featured any more than anybody else. Everyone does their part to keep the tunes bouncing and elastic.

The album kicks off with "Move the Body Over, a traditional tune that truly captures the New Orleans sound. This could almost be mistaken for one of Louis Armstrong's Hot Five pieces, slinking along, bouncy and fresh. Henrik Stiigvad's banjo breakdown adds much to the excitement, and in fact serves to signal this music as a twenty-first century resuscitation of the tune rather than mere stylistic mimicry of years gone by.

The band really stretches out on "May the Circle be Unbroken, where Linda Young exhibits her strengths as a gospel-drenched blues shouter. Their enthusiasm makes the piece one of the best (and longest) on the album. Starting off in a relatively straightforward manner, the saxophone states the theme before Young comes in and blows the tune apart. Her exuberance really carries the band here, and before long this traditional work has shed all of its clichéd, overdone associations, and become yet another bubbling party tune, fresh and soulful. Actually, the same could be said of almost all of the songs here. The band's excitement in playing these tunes comes across to great effect, turning the date into a lively blowing session rather than a dig through the vaults of past glories.

The album closes with "Oh! Didn't He Ramble?, a loose jam featuring overdubbed musings by Milton and Ruby Batiste about the glory days of New Orleans jazz music. Before you know it though, the couple speaks of the tune playing behind them, to which Ruby refers enthusiastically. "Man, she says, "I could cook for days with this. She's right too, and the brief conversational riff suddenly becomes an indication of the continued vitality and relevance that people like Lacen bring to New Orleans' rich musical past.

Move the Body Over; Loch Lomond; Coffee Grinder Blues; It Had To Be You; May the Circle Be Unbroken; Do You Know What It Means To Miss New Orleans?; Dummy Song (Tulane Swing); After You've Gone; Old Gray Bonnet; His Eye Is On the Sparrow; Darkness On the Delta; Birth of the Blues; Roses of Picardy; At the Cross; Ting-A-Ling (Waltz of the Bells); This Train; Oh! Didn't He Ramble?.