Bobby Kyle: After The Storm 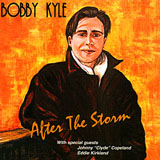 After The Storm is a two-year labor of love from ace guitar man and soulful blues singer Bobby Kyle. His debut, it demonstrates a remarkable standard of quality and an ear for detail that was the result of apprenticing for six years alongside Alabama soul/blues shouter, Handy Award winner, Eddie Kirkland; and playing and recording for six years with Grammy Award winner, Johnny "Clyde" Copeland, with whom Kyle performed until Copeland's death in 1997.

Accompanied by both of his friends, Kyle is also joined by the Uptown Horns (who toured with the Rolling Stones), a two-saxophone, trumpet and trombone quartet, on "Turning Point" and "Love of Mine." Kyle is joined by Copeland's baby girl Shemekia on the title track. On "Upper Mill," the only instrumental on the disc, he is joined by Joey Simon on harmonica. Cesar Diaz, who played guitar for Bob Dylan and was Stevie Ray Vaughan's equipment technician, massaged this release into a seamless whole.

But more than a guest album, these eight originals and two covers (Tyrone Davis' "Turning Point" and Buddy Ace's "Love of Mine ) establish Kyle's versatility as both a top-notch guitarist and soulful vocalist.

On "Standing in the Background," Kyle plays guitar with a distortion effect, giving this shuffle a unique sound. Kirkland sings his commentary as backup on this number. "Work It Out" features the Uptown Horns providing a lush sound alongside Kyle. Kyles's slow guitar playing on the title track is joined by Shemekia on background vocals. His wah-wah-driven guitar is given a power boost by the Uptown Horns on "Love of Mine," while "Got What You Wanted" is one of the prettiest songs in this collection, with Kyle singing this funky blues accompanied by pianist Floyd Phillips, who also delivers a moving solo.

The Uptown Horns return on "Going Out Walking, with Johnny Copeland taking a guitar lead on this T-Bone Walker-style boogie. "Upper Mill" features harmonicist Joey Simon on this moody instrumental, with Phillips again lending an effective piano line as Kyle overdubs his guitar playing with acoustic guitar. Simon joins Kyle once again on "Rolling Up My Sleeves, a hard-rocking blues. "Turning Point closes the album on an upbeat note, with the Uptown Horns joining Kyle for the last time.

Each song is deeply introspective and reflective of Kyle's life at the time, best exemplified by the title track, which was written at a time in Kyle's life when circumstances rose against him like a raging storm. He had lost of number of friends, and realized that Copeland was ill and nothing that could be done. Writing this song was therapeutic and helped him in the healing process.

Kyle is a richly original new voice, one that deserves to be heard. This debut, a dedication to Copeland, defines Kyle's fiercely independent nature and his ability to weather a storm.

Track Listing: Standing In The Background; Work It Out; After The Storm; Can't Make Ends Meet; Love Of Mine; Got What You Wanted; Going Out Walking; Upper Mill; Rolling Up My Sleeves; Turning Point.

Title: After The Storm | Year Released: 2007 | Record Label: Self Produced