Stewy von Wattenwyl: After the Rain

By DAN MCCLENAGHAN
October 26, 2013
Sign in to view read count 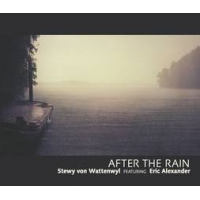 After the storm has passed through, after the rain, with the sunbeams peaking though the breaking clouds, the day takes on an unblemished clarity. The horizon's sharp edge separates land from sky. Details of the landscape shine with fine detail. That after-the-rain clarity and focus is what elevates the artistic endeavor. Swiss pianist Stewy von Wattenwyl, with recordings like the trio outing Dienda (Brambus Reocrds, 2005), and the quartet set with saxophonist Eric Alexander, Live at Marians (Bemsha Music, 2009), has displayed his own keen-edged focus with distinctive covers of the American Songbook, jazz standards and a handful of his own distinctive tunes.

On After the Rain von Wattenwyl mixes up quartet and trio workouts, with saxophonist Eric Alexander sitting in on half the numbers.

Von Wattenrwyl's approach to jazz is traditional, straight ahead and gorgeous, always. The pianist's original, "It Ain't That Bad" opens the disc with a strutting rhythm, then a flash of the pianist's right hand to introduce Eric Alexander. It's hard to believe this isn't an American jazz standard, from the days of saxophonist Hank Mobley. It could become one, with its stealthy groove, and Alexander's inspired blowing. The quartet embraces the pop singer Michael Jackson hit, "She's Out of My Life," opening with von Wattenwyl's supple keyboard touch swaying into Alexander's soulful, sad notes, coming straight ahead then slipping into some subtle forays. Von Wattenwyl moves into the trio mode with his original "Hellblau #2, with its insistent rhythm and superb trio interplay.

On the set's title tune, from the pen of John Coltrane— from the saxophonist's Impressions (Impulse! Records, 1963) album—the trio explores the crystalline beauty of the tune with a timeless four and a half minute reverie, leading into the jaunty mood of Hoagy Carmichael's "Skylark." Alexander returns for the final three tunes, beginning with a straight forward take on the ever familiar "When You Wish Upon a Star," before laying down a hot version of saxophonist George Coleman's "Apache Dance."

The record closes with another von Wattenwyl original, the ruminative trio effort, "Otro Mundo," with Kathrin Bogli supplying a heart-meltingly gorgeous lead on cello, to close out this exceptional After the Rain.

It Ain't That Bad; She's Out of My Life; Hellblau #2; After the rain; Skylark; Vol d' autome; Little Niles; When You Wish Upon a Star; Apache Dance; Otro Mundo.