Zevious: After the Air Raid

By JOHN KELMAN
January 6, 2010
Sign in to view read count 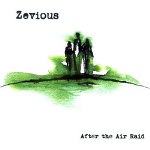 Amidst a legion of guitarists for whom chops is the end not the means, there's an alternate group of players with unrelenting skill and an avoidance of the "look at me" posing that seems endemic to the instrument, especially when it comes to more aggressive, rock-centric playing. Ben Monder's remarkable Oceana (Sunnyside), one of 2005's best albums, couldn't have been performed by a guitarist with anything less than complete mastery of his instrument, yet avoided any posturing front man mannerisms. Based on After the Air Raid, Zevious' Mike Eber is a like-minded guitarist; not quite as monstrously talented as Monder, perhaps, but certainly coming from a similar space where technique is clearly nothing more than a means to a very jagged end.

Digging even further back, the jazz-trio-turned-power-trio Zevious has a number of even more fundamental influences. King Crimson co-founder/guitarist Robert Fripp looms large over the entire group, but especially with Eber, who waxes labyrinthine on the syncopated "Coma Cluster" and sinuously sustaining on the similarly irregularly metered "The Ditch," hearkening back to Crimson circa Larks' Tongues in Aspic (DGM Live, 1973) and Red (DGM Live, 1975).

The entire trio, in fact, uses this heaviest-of-the-heavy Crimson incarnation as a touchstone. Bassist Johnny DeBlase, when he's playing his jaggedly distorted electric, thunders with earth-shattering weight à la John Wetton, but with greater overall sophistication and precision. Drummer Jeff Eber plays with the mathematical accuracy of Bill Bruford on "The Children and the Rats," but with far greater abandon on the closing "Glass Tables," a knotty excursion into combined junk funk and powerhouse riffing. The repetitive aspects of Zeuhl progenitor Magma also figure deeply into Zevious' roots, but without the chanting that makes the French progressive band an acquired taste.

The Zevious-Monder connection is especially clear on the arpeggio-driven "The Children and the Rats," though its periodic devolution into crunching, dissonant distortion is something altogether different. And while "Mostly Skulls" is driven by a shifting, irregularly metered power riff bolstered by Jeff Eber's tumultuous interplay, it's equally defined by guitarist Mike Eber's long-toned melody—hardly lyrical, but spare nonetheless.

With Mike Eber's oblique thematic sense, it's sometimes difficult to know whether he's playing a prescribed part or soloing with cerebral abandon. Certainly his extended play over the fulminating rhythm section on "Mostly Skulls" is improvised, but its construction is so focused as to feel preconceived. DeBlase resorts to acoustic bass relatively rarely, but when he does on "That Ticket Exploded," it's for a solo that creates yet another touchstone for the group in modernistic free jazz wanderings, as he fires volley after volley of double stops before the song turns faux-metal again.

Where's The Captain?; Come Cluster; Mostly Skulls; The Ticket Exploded; The Noose; iNCITING; Gradual Decay; The Ditch; After The Air Raid; The Children And The Rats; Glass Tables.