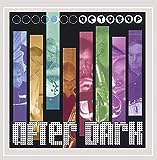 In spite of all that has been written and said about it, West Coast jazz in the '50s and '60s wasn't really "cool"—no more so than what was being played on the East Coast or in the heartland—but it did have a certain indefinable quality that set it apart. I'd say it was more "hip" than "cool." There surely was ample fire in its belly, as anyone who has heard Art Pepper, Gerry Mulligan, Shorty Rogers, Bud Shank, Shelly Manne, Jack Montrose, Frank Rosolino, Bob Gordon, Hampton Hawes, Jimmy Giuffre, Bill Perkins, the Williamson brothers, Lennie Niehaus or any of their West Coast colleagues in full flight will affirm.

Whatever one chooses to call it, the melodic and rhythmic temperament that characterized West Coast jazz has been reclaimed and given new life by Octobop, an eight-member ensemble founded by saxophonist Geoff Roach, whose third album, After Dark, is a new-millennial version of what jazz enthusiasts on the Third Coast were hearing and appreciating some forty or fifty years ago at the world-renowned Lighthouse and other near-Pacific venues.

Ironically, Roach patterned Octobop on an East Coast group, the legendary Miles Davis nonet of 1949-50 that produced the recordings that would come to be known as "the birth of the cool." Composers and arrangers on the West Coast, taking their cue from Davis, began blending the new sounds into their repertoire, thus giving birth to the West Coast "sound." It is that unique sound that Octobop warmly embraces, nudging it forward in sleek new arrangements that pay homage to the originals without slavishly imitating them.

The songs chosen are for the most part representative of the West Coast period, with only one new composition, bassist Steve Swallow's "Thinking Out Loud." There are two numbers by Henry Mancini, one each by Mulligan, Rogers and Cy Coleman, two numbers ("Relaxin'," "Broadway") from the Al Belletto sextet's book, two standards by Rodgers and Hart, Giuffre's "The Duke You Say!" and Jerome Kern's "The Way You Look Tonight." Octobop plays them coolly but not without ardor. Solos, even though several notches below Mulligan, Pepper, Rogers, Shank, Rosolino, Baker and the others, as one would expect, are consistently respectable.

Without waxing nostalgic, I believe the heyday of the West Coast sound was a benchmark in the annals of jazz, and it's good to know it hasn't been forgotten. Long live Octobop, and long live the music on which it is based.

Playboy Theme; Dreamsville; The Duke You Say!; The Way You Look Tonight; Relaxin