By MARK CORROTO
November 23, 2014
Sign in to view read count 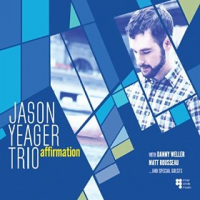 No sophomore slump for pianist Jason Yeager. His trio disc Affirmation actually has the feel of a mature artist's fourth, fifth, and sixth recording. Maybe that is because his trio is a true working unit with bassist Danny Weller and drummer Matt Rousseau or possibly it's his ability to integrate varying musical concepts without sounding imitative.

Yeager's piano, under the tutelage of Danilo Pérez, masterfully pulls from jazz, classical, blues and pop music with a seamless approach that yields a coherent and consistent document. He pulls bits of Thelonious Monk-speak on "Blues For Billy P" that morphs into a Wynton Kelly stroll complete with Weller's talking bass solo. Just when you might think you have flushed out his style, he drops a bit of Bill Evans on you with "Achi" and some intricate chamber music by Olivier Messiaen, "Dance Of Fury, For The Seven Trumpets."

Yes, it is enough material for three records, but Yeager is keen to both exhibit his trio's skills and entertain. That certainly makes for a richer listening experience.

Besides the trio music, Yeager invites several guests into the studio. Vocalist Aubrey Johnson sings a wordless accompaniment to "Affirmation" and renews the beauty of the Lennon and McCartney composition "Julia." Saxophonist Noah Preminger lights up "Smiled First" and trades jabs with trumpeter Jean Craze on "Keep the Fire," a Latin-fired piece of hard bop. Yeager keeps things joyous on "Stumblebop" by channeling his inner Oscar Peterson and exalting swing. Each piece here feels like a concept for his next recording, but also each dissimilar composition fits into Yeager's grand unification theory.