By STUART BROOMER
September 1, 2008
Sign in to view read count 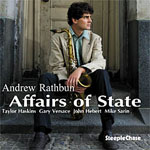 Andrew Rathbun is a Canadian-born tenor saxophonist resident in New York, a Brooklyn regular who has garnered support from fellow tenorists Joe Lovano and Dave Liebman as well as trumpeter Kenny Wheeler. That should give some sense of Rathbun's lineage. He's a thoughtful player and—true to the influence of Wheeler (and Booker Little) and the mid-'60s Miles Davis quintet—a skillful composer, honing a refined lyricism that explores challenging harmonic patterns.

Rathbun likes extra-musical themes (two of his previous CDs have been poetry settings), and the pieces here reference the decline of America in the Bush years, from the Iraq war to collapsing infrastructure and luxury condos; however, the album's dominant moods are melancholy and resilience rather than rage, an introspective lyricism that wouldn't otherwise suggest the political theme. Rathbun's compositions use contrasting elements to create tension and develop texture, as in the antiphonal voicings of "Fragmented," the dissonant elegy of "We Have Nothing But Tears" and the effective use of sparkling electric piano on "Folly." His tenor sound possesses significant flexibility, from warm calm to gritty resistance; it's a fine match with Haskins, whose pitch inflections can add a sudden illumination.

The rhythm section—Herbert joined by pianist Gary Versace and drummer Mike Sarin—is a model of support, a loose and engaged presence balancing empathy and aggression with an almost orchestral breadth. The result is consistently thoughtful, well-crafted music in a mature idiom.

Fragmented; We Have Nothing But Tears; Around the Same Circles, Again and Again; Break the Chains; 5th Anniversary; Fiasco; Ongoing; Folly (of the Future Fallen); Paint Peelings.