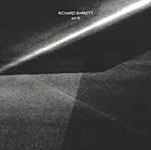 Richard Barrett makes music that demands more than total attention, and it's impossible not to be sucked in. On adrift, a collection of three pieces, his command of sound in all its depth and glory is utterly alluring. This makes it easier to fall prey to the seduction of the music—a magnificent collision of instrumentation on "codex IX" and "codex VII"—and on the glacially spare adrift which is equally demanding of active and energetic participation. In fact, it is entirely possible to conceive of Barrett sweeping his baton or his conducting arm towards his audience, inviting them into the composition itself.

Barrett's music is a magical veil through which much of the soundscape of the known and unknown world is revealed. What is revealed to reveal not just the soundscape's dramatic personae and text, but also a music that is dynamic and alive. In fact, the music appears to derive its inner beauty and unbridled energy from the individual particles that dance in a super-charged manner, rubbing against each other to write stories that are all their own. There is a deep and sensitive elegiac side to this piece and although much of the subtext is absurdist in nature, with screaming guitar and growling horns, there is a touching, wail in the conclusion that is brought about by a brief, yet telling collision of viola, horns and electronics.

The centerpiece, "adrift," features a memorable relationship between the piano and all its glorious acoustic nature cast against the contrapuntal electronics. Had this been conceived as a sonic device it would have been nothing new to behold and hear. But Barrett has done more than just pair the nature of well-tempered acoustics with well-selected frequencies in the hum of electronics. Here, unlike in the other two pieces a single instrument is featured. And Sarah Nicolls' piano work is virtuoso as well as inspired by the sentiment of the artist being left to find herself amid utter desolation. Nicolls displays splendid touch and dynamics. Her expression naturally captures the inner drama of this piece, and she delivers a performance depicting an artist who is both shaken and strengthened by the experience of desolation.

The music takes a sharp turn in "codex VII" and is decidedly brighter and more spirited. The fact that there is more extensive participation of acoustic instruments "live" and a diminished role for electronics here throws the considerable improvisational nature of this piece into immediate focus. Here, also, the ensemble is more focused on the gentle harmonics that describe the joy of human endeavor. Again, the diminished role of electronics strongly suggests a deeper empathy that the artist has for pure sound in an uncontrolled environment.

Barrett is ahead of the times. His stellar intellect and depth of understanding—not simply of tonal color—but also the pure energy of sound set him quite apart from modern composers in Europe today.