By JAKOB BAEKGAARD
June 29, 2012
Sign in to view read count
Sound is everywhere around us. When we live, we experience life as sound and sight. Words, rhythms and vibrations are part of the way we communicate and perceive the world.

Music, at its best, is a special way of communicating through sound. The message cannot and should not be translated into words. Instead, the sounds become their own language, a path into an awareness of being.

For a long time, percussionist Adam Rudolph and reedist Ralph Jones have travelled the roads of sound. Their work is in the lineage of fellow spiritual travelers like saxophonists John Coltrane and Albert Ayler, singer Nusrat Fatreh Ali Khan, and reedist Yusef Lateef, with whom Rudolph has collaborated intensely.

Taking charge of the artistic process, Rudolph has tirelessly documented his journey in sound on his own Meta label, which has released an awe-inspiring string of albums. Among them are these two records with Ralph Jones. 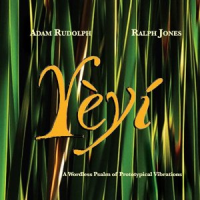 Yèyí: A Wordless Psalm of Prototypical Vibrations was recorded live in concert at Delta College Theatre in Michigan and highlights two empathic musicians, who manage to conjure a world of sound with their many instruments. In the liner notes, it is emphasized that: "Yèyí (yay-yee) was performed in a continuous flow as a living dialogic narrative of sonic images and language forms punctuated by the coloration of silences. Track markers are for reference only."

Indeed, the music flows in a steady stream, bringing in various pulsating sounds that can be experienced as a ritual of musical transcendence. Jones breaks the silence with his horn that honks, whispers and sings in elaborated lines, while Rudolph folds out a gentle cushion of rhythms emerging from his impressive arsenal of instruments, including djembe, congo slit drum, frame drum, glockenspiel and percussion.

Listening to the music is like walking into a rain forest of various sensory impressions. Gently falling raindrops, tribal voices and roaring exotic animals hiding amidst green trees form the foil of a complex musical landscape that lies outside the modernity of the city and brings the soul back to its primary state of mind. It is an existential musical document that brims with beauty and life. 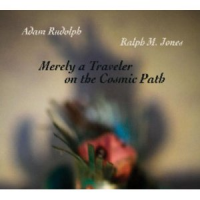 Merely a Traveler on the Cosmic Path

Whereas Yèyí: A Wordless Psalm of Prototypical Vibrations was recorded live and presented as an uninterrupted organic experience, the second collaboration between Adam Rudolph and Ralph Jones emerges as a sound painting that operates in the space between composition, improvisation and studio manipulations.

Merely a Traveler on the Cosmic Path uses sample sessions of the two musicians and they add to a diverse work of art that gives room for contemplation.

The almost telepathic musical dialogue between Rudolph and Jones can be compared to that of trumpeter Rob Mazurek and drummer Chad Taylor, who also work in the field between improvisation, composition and electronic soundscapes.

The album is divided into fourteen segments and shuns the lengthy, cathartic explosions of the predecessor. Instead, it reveals itself through magical miniatures where each tone contributes to a poetic entity where every motive becomes connected and the part relates to the whole. Enhancing the wealth of instruments is the use of piano, as in "Illuminated," where the rhythmical figures of drums and tangents become intertwined and highlight the percussive quality of the piano.

Yèyí: A Wordless Psalm of Prototypical Vibrations and Merely a Traveler on the Cosmic Path show Rudolph and Jones as capable of transcending the limits between composition and improvisation, organic and electronic, East and Eest. Their music is full of rhythmical vitality and creates a spiritual language of creation that isn't exclusive, but opens the senses to the endlessly deep possibilities of sound.

Merely a Traveler on the Cosmic Path

Tracks: Spirit Voices; Storytelling; Illuminated; Rainbow Rivers of Skin; Fragrance of Compassion; Ballad of Questions; Refracted Splendor; Spectrum; Calligraphic; Wanderings; Starlit; The Poetry of You; Those Who Know, Will Know.