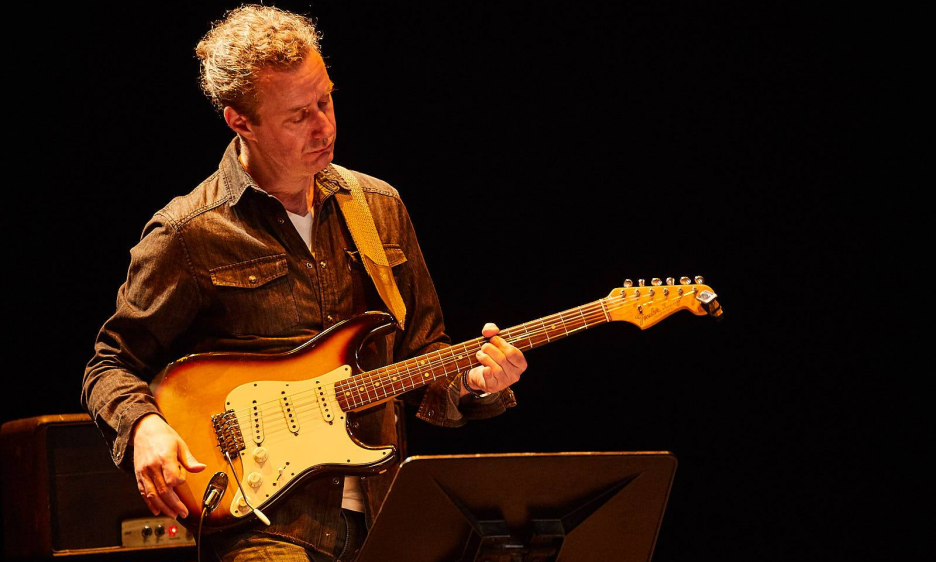 As the scraggly haze of copiously denim-clad, baseball cap and ponytail-touting figures assembled onstage, Adam Rogers' Dice Trio bore the indifferent appearance of a small town bar band—which was not entirely inappropriate. A conservatory-schooled classical player, tutored in jazz by John Scofield and known for stints with Michael Brecker, Chris Potter and more, Rogers conceived of Dice as his way to kick back and explore rawer formative interests—namely funk, blues and a whole lot of rock.

The mood was unapologetically established with the intense opener "Dice," a thick funk-rock sludge built around a series of asymmetrical riffs which doubles as the opener/title track/manifesto of last year's recorded debut, before the trio proceeded to indolently work their way through eight-tenths of the self-released LP in order: The lazy mid-tempo blues nod "Chronics" was followed by the frenetic in-the-pocket pulse of "Sea Minor" before the musicians even looked up to acknowledge their audience. By now, 30 minutes in, the languid sense of three guys jamming in a garage was set—chunky, funky riffs picked up and passed around, rhythmically dense but harmonically tethered fare serving as an undemanding canvas for Rogers' searing, scintillating solos. Self-consciously dumbing down, the American guitarist flipped repeatedly between passages of familiar pentatonic rock and blues phrasing and moodier modal extractions; the sense is of an intellectually minded orator trying to connect with the everyman within.

One wondered at times if he missed having more meat to play with—while it was liberating to hear a jazz guitarist free from the rigmarole of playing over the changes, at times it might have been more engaging for all had there been a few more changes to play over. Despite being billed as a trio, established bassist Fima Ephron and drummer Nate Smith felt like the definition of sidemen; dealt only a handful of solos and employed to keep up the groove. At the most intoxicating moments, Smith slyly subverted the order, leading a rhythmic mutiny from within, breaking from the beat to embark on brain-bending polyrhythmic excursions while Rogers watched on in wonder, counting the time in his head.

Diverse tributes were paid to three unlikely influences, with rapper Flavor Flav incongruously evoked in the staccato grunge-metal stomper "Flav," which followed the moody, finger-picked electro-folk dirge "The Mystic (For Fred McDowell)," while the stonking funk-rock strut of set closer "L the Bruce" served a sideways a nod to comedian Lenny Bruce.

More subdued textures—and, even, chord changes—came in the later stages, with a sweetly slumbering, unironic cover of Willie Nelson ballad "Crazy," littered by atmospheric volume swells, astride an equally pastoral wander through "I Fall in Love Too Easily." But it was a second standard which gave the evening its steamiest statement: A genetic reconstruction of "Ba-Lue Bolivar Ba-Lues-Are," Thelonious Monk's twisted blues angrily contorted into a funk-rock package which laid bare everything beautiful, brave and baffling at Dice's core: Try as they might, rock guys cannot play jazz, while these jazz guys have willingly chosen to dumb down and embrace a raw, rock n' roll aesthetic. Perhaps inevitably, things cook hottest when Dice truly discarded ideas of genre altogether.