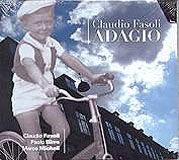 Claudio Fasoli has had a long and varied career as a jazz saxophonist. In the early seventies he was part of an electric jazz group called Perigeo. The next decade saw a shift into acoustic jazz. But Fasoli was not static in his involvement. During this time he played with a diverse blend of musicians including Tony Oxley, Kenny Wheeler, Henri Texier, Manfred Schoof and, towards the end of the decade, he got into big band mode with the Great National Orchestra.

Fasoli's direction has changed again. He is now into the European aesthetic. The move impacts the compositions on this recording, as he weaves the beauty of the tradition into his compositions.

Given the vein Fasoli is pursuing, the music here generally rests on the mellow side. "Kimbale first brings this in as Paolo Birro (piano) and Marco Micheli (bass) set the tone in tandem. Micheli breaks for a pliant expansion of the core and Birro sets up the counter attack with emphatic notes before he begins a melodic run. Fasoli extends the melodic body, his loquacious soprano crafting exquisite lines.

The memorable melodies are another trait that runs through the compositions. "Poesia is a delectable ballad. Birro opens with cool rumination; Fasoli warms and coaxes it into enchantment, his pace measured as he stays firmly in the melody. "Adagio is a charming waltz. The tempo is light and graceful, and Fasoli invests it with a gently swinging air. Birro sprinkles a fragile shower of notes, his lines earthed by Micheli. The trajectory changes and, as Fasoli's phrases become taut, he draws Birro into that frame. The mood has shifted but transition is still in the air as they revisit the melody, up the tempo and let the tune ride out in a blaze of glory.

Fasoli shows that he has a sense of humor, with "Piano Insight a solo vehicle for his tenor. Again, he exults in the melody, stamping it with his use of space and his deliberate pace with an occasional dart that billows the linearity.

The trio complements each other well, its playing solidly structured and the melodies captivating. A fine album.