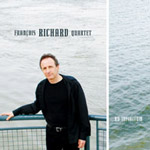 The flute often gets no respect as a jazz instrument, and even the notes to Ad Infinitum start off with a kind of apology saying that the flute has a "refined elegance and charm that make it a natural partner of the piano, and musical encounters with flute are often of the intimate, peaceful kind."

Perhaps you too may feel reluctant and have shied away from the flute as a lead jazz instrument. If that is the case, Ad Infinitum might just be the cure. Francois Richard's playing (on both C and alto flute) and compositions (all Richard originals except "Scout Boots," by pianist Geoff Lapp) have a contagious energy. His quartet is very tight and effortlessly interactive because, as Richard says, they performed the pieces often before recording them. This cohesion is quite apparent and the album has an almost live feeling.

It is hard to pin Richard down stylistically, since the eleven tracks vary quite widely, ranging from the driving, hot feel of "Intuition," "Secousse cosmique" and "Ete 99" to the seductive "Rhodium" and "Ad Infinitum," the varying balladry of "Une Autre Histoire" and "Between Rain and Clouds," a funky "Joyeux millenaire," and more.

This is good music and it is easy to let each track take you away, despite the fact that the flute is the lead instrument. Like Victor Prieto's work with the accordion on Persistencia, this music transcends the instrumentation, and the different musical personalities of the bandmembers come to the fore on each track.

For example, "Labyrinthe" begins as if it were going to be in a Latin rhythm, but the piece does not gel as such, as the metric drive is never sustained. After teasing us this way for about a minute, Alarie begins to cook on walking bass while Lapp adds pungent chords and lines. By the time Richard joins in, the band is burning and just does not let up, even through the bass solo. "Apologie" sounds at first as if it's in the Debussy "Syrinx" solo flute mold, only to take off in an entirely different direction when it is revealed to be an introduction to a sprite and lively swinger.

Ad Infinitum will definitely keep you on your toes, and your ears will thank you for the experience.