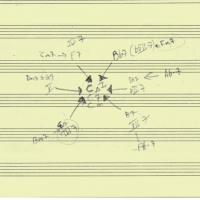 San Francisco Bay Area guitarist John Schott presents the debut recording of his long-running jazz trio, and third album for New York City-based producer, composer and saxophonist John Zorn's Tzadik record label. As expected, Schott doesn't solely adhere to the tried and true within the jazz guitar trio format. It's not too radical, but not an album constructed on worn out jazz or pop standards.

"Hemophilia (For James "Blood" Ulmer) is seemingly inspired by the idiosyncratic blues, funk and jazz guitarist who put in some quality time with Ornette Coleman before launching a fertile solo career in the early 80s. Yet this piece is centered on a punchy dub groove as the trio's sensitivity is inherent amid bassist Dan Seaman's opening arco notes leading to a driving beat, tastefully executed by drummer John Hanes. Moreover, Schott locks into a fertile improv vehicle atop a punchy beat and a subtle melodic hook, shrewdly juxtaposed by Seaman's contrapuntal melodic responses. The guitarist's capacious developments, ringing harmonics and animated phrasings interweave the jazz and dub element with a personalized trio focused insignia, tinted with quaint delicacies and ethereal hues.