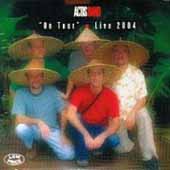 The name is Actis Dato. Carlo Actis Dato. And it belongs to one of the most interesting musicians on the scene today. The scene is jazz, but as seen and innovated by Actis Dato the boundaries go beyond the norm. That in itself is not usual, jazz having been stretched, distorted and stomped upon in several ways by myriad musicians which includes those who are oblivious to the fact that they have missed the calling.

Actis Dato is the leader of the Atipico Trio, the Carlo Actis Dato Quartet, TAO, Actis Furioso and of ART Studio besides playing in numerous duo settings and going out on his own. Outside his realm he is part of the Italian Instabile Orchestra. Each has a different facet which Actis Dato fills with his irrepressible spirit. He makes sure that the rest of his band has the same spontaneity and fervor that animates him and his music.

Watching any of the bands with Actis Dato, is like watching theatre. The band weaves a little bit of dance with the audience, some horseplay between the members, in short an overall sense of fun. His compositions are often a joyous ode. As an arranger he not only leaves plenty of room for the soloists but the ensemble passages take on different shapes as they move along. Playing with the same members has its advantages and one can feel the natural ease in which he and Massimo Rossi become foils for each other. Recorded at a concert in Switzerland last year, the Actis Band sees one change with the introduction of guitarist Karsten Lipp. He fits right in adding some very interesting textures to the mix.

Actis Dato has a penchant for taking the name of a city he has visited and mating it with some music. And so he finds a mambo in Delhi, India and honors it with an album, "Delhi Mambo, just as he found the city in Japan and added the rap to come up with "Takayama Rap a tune flies into the stratosphere with its odd metre, the whirling melody churned by the horns with Lipp unleashing whooping lines and some rock riffs. Actis Dato and Rossi come in and converse in bent tones, their lines interweaving. These mates of long read each other perfectly and that understanding is key to the pith and dimension of the music. Rap? No one does. It's just Actis Dato having some fun, just as he does on "East Mambo. The rhythm bristles, shifting from the groove of the mambo heated by Actis Dato and Rossi with notes that spin, revolve and provide the fertile bed for the guitar and some vigorous thrust from Dario Bruna on the drums and Federico Marchesano on bass, as it grabs several moods that shift seamlessly from rock to free movement. Shape and structure are in constant forge on "Nefertari." Actis Dato lays his lines straight on the baritone and then honks short blasts that bounce in and around the wail and squiggle of Rossi, when, whomp, he is enunciating the tune! The moment is short lived, as a new spirit grasps him and he unleashes torrid lines that sweep across in molten frenzy.

The program is balanced with the slower, beautifully nuanced tune, "Son para el Che," a tribute to Che Guevara. The melody permeates the senses, a feeling made all the more palpable by the arrangement. Lipp lights up the head right from his first note which Actis Dato enunciates through long, lustrous lines on the bass clarinet. The tune opens up as Bruna fires the flare on the drums with Rossi shaping a different adjunct, his liquid lines having just the lightest whorl and eddy. The snare is complete as Actis Dato adds the punctuation to Rossi's statements and the band goes on to weave a long lasting spell. This stands in contrast to the flamboyant "Viva Zapata," a rambunctious outing that captures the band in all of its electrifying intensity. Lipp is upfront and center, egged on by Bruna and Marchesano. But it is Actis Dato who is the crux, with his yells driving the intensity upwards. He does play and it is the baritone saxophone this time, his notes tensile and swarthy, adding the muscle. The understanding and the interplay between the band mates gets another shot as they whirl around in dervish delight on "Porci Padani". There is an inherent folk melody but they fragment it, the hammer of free jazz shunting the structure into the stratosphere. The intensity never lets go even during the returning references to the theme.

The power and the glory of the Actis Dato Band has been convincingly captured.