By GERMEIN LINARES
November 23, 2005
Sign in to view read count 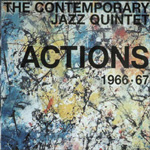 At any moment, the dialogue to some '60s sci-fi movie seems ready to enter the eerie, spooky world of Actions. "Geez, Jim. Where have we landed?" "This, Timmy, this is planet free jazz circa 1967." Cue the "singing saw," the album's most prominent feature, and you can almost see the string pulling the spaceship off to the heavens. The Contemporary Jazz Quintet's Actions is certainly an evocative work; its moods are more dreamy than factual, its execution more fantasy than reality.

The album also shows its age, and that's a good thing. Nowadays, jazz experiments unfortunately border on noise, giving listeners inconclusive results. On Actions, recorded during '66 and '67, concepts of structure, melody, and rhythm are tweaked, prodded, and scrutinized. Though at times disorienting, the Danish group maintains a musical resiliency throughout the album's five numbered "Actions."

Niels Harrit's saw, in particular, comes unexpected at first: a loopy, weird sound in the opening moments that eventually convinces you of its merits. Released on Atavistic's almost always excellent Unheard Music Series, this recording is a worthy trip to an alternate time and space. Dig that saw action!

About The Contemporary Jazz Quintet