By EYAL HAREUVENI
August 3, 2006
Sign in to view read count 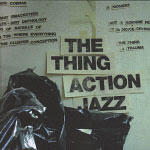 The Scandinavian trio known as The Thing—Swedish saxophonist Mats Gustafsson and two Norwegians, bassist Ingebrigt Håker Flaten and drummer Paal Nilssen-Love—seems to be rewriting the definition of its brand of brutal jazz. After being compared to Peter Brötzmann's early trios, being called a power jazz trio, and being compared to garage rock, The Thing has settled on the term Action Jazz to describe this delicious hell of a noise.

Action Jazz, recorded in Stockholm in December 2005, is the fourth release by The Thing for the Smalltown Superjazz in the last two years. As on all previous releases, the repertoire is quite eclectic. Gustafsson is a great saxophonist with colossal lungs, and the rhythm section is one of the busiest today, lending its services to South African saxophonist Zim Ngqawana, Chicago reed player Ken Vandermark, the Swedish-Norwegian Atomic quintet, Japanese koto player Michiyo Yagi, Finnish-American guitarist Raoul Björkenheim's Scorch Trio and Nilssen-Love's own quartet. On Action Jazz, they deliver one of their heaviest performances.

This loud ride erupts with a tight, rock-solid two-minute cover of the Norwegian psychedelic rock group Cato Salas Experience's "Sounds Like A Sandwich," which The Thing covered on a live EP (together with American reed master Joe McPhee and CSE) of the same name last year. On the cover of Japanese pianist Yosuke Yamashita's mid-'70s piece "Chiasma," Gustafssson's sax tears open the sky and Flaten and Nilssen-Love blast with metallic, harmolodic polyrhythms; on the following piece, Ornette Coleman's "Broken Shadows," from the same era, they adopt a much more spacious attitude. But soon the trio sound crystallizes into an explosive waterfall on their cover of a piece by the American bass and drums punk unit Lightning Bolt. This bombastic rendition shines with reckless abandon—Nilssen-Love pounds all over the place, Flaten slaps on the bass and Gustafsson screams.

The original "Better Living" is a free improv piece that changes its route abruptly and emphasizes the imaginative playing of Nilssen-Love and the unique sounds of Gustafsson's slide sax. "Danny's Dream" is a heartfelt cover of the best-known melody by Swedish jazz pioneer Lars Gullin, one of the greatest European baritone sax players and one of Gustafsson's musical heroes. It features Gustafsson on the alto sax, with which he still produces the wide, big sound that was identified with Gullin.

"The Nut/The Light" is a tight and feisty cover of two catchy songs by Gustafsson's daughter, Swedish teen punk idol Alva Melin, which he already covered on his solo baritone release Catapult (Doubt Music, 2005)—but here they sound more focused, especially the soulful "The Night." Gustafsson is credited with only one piece, the closing "Strayhorn," a slower and almost meditative track with quirky, rumbling cymbal sounds; low-register, slow blowing of the baritone sax; and gentle bowing of the bass.

Action Jazz is another testimony to the success of this group's risk-taking and barrier-shattering attitude.