Tom Collier: Across The Bridge 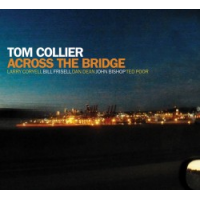 Ruminations on the past, musical or otherwise, are often weighed down by the sediment of sentiment. But it certainly doesn't have to be that way. Looking back can provide an outlet for the imagination to take control, and vibraphonist Tom Collier seems well aware of that. On Across The Bridge, Collier revisits his youth, delivering nine original numbers that touch on a childhood spent on the opposite side of the West Seattle Bridge from where he currently resides. It's a personalized program that succeeds by avoiding mawkish tendencies and the quicksand of nostalgia. Instead of taking a tenderhearted path to the past, Collier reflects by rocking out with a strong crew of musicians who seem more than willing to have a good time in his world for a while.

The stories on Across The Bridge are brought to life by three different bands, with Collier and bassist Dan Dean serving as the constants between the groups. Four tracks bring guitarist Larry Coryell and drummer John Bishop into the picture, three numbers feature guitarist Bill Frisell and drummer Ted Poor, and two pieces are delivered by the trio of Collier, Poor, and Dean, with the bassist also covering guitar duties to essentially create another quartet. It's to Collier's credit that, despite the personnel change-ups across the album, there's tremendous consistency here.

"The Junction," a chromatically-laced composition with controlled aggression, kicks things off and sets things on a course that essentially remains steady for the entire album. Collier, Coryell, Dean, and Bishop dive headfirst into this heady rock-based music, bringing lots of energy and attitude to the surface. Following that brief opener, the band-shifting begins. The Frisell group comes into the picture to deliver "Beach Drive," a somewhat slinky surf-side song that's far more lighthearted than what came before it; the Coryell clan comes back with "Gold 'N' Blues," the only swing based number on the record; the Dean-on-double-duty outfit joins the party with the slick funk of "The Admiral's Point Of View"; and the Frisell band returns for a riff-fired rocker dubbed "47th 'N' Hudson." In each and every one of those pieces, Collier remains at the center of the action while also creating an atmosphere that encourages interplay and invites his fellow musicians to take chances and step into the spotlight.

The lone ballad on the album—"Genesee"—is the one place where dewy-eyed visions of Collier's past come to color the music. But there's nothing sappy about it, as it plays more like a daydream than a trip down memory lane. After that, the Collier that we've come to know from earlier in the album comes roaring back. "Harmonious Effusion On Olga Street," beginning with Collier's hypnotic sixteenth note riffs on marimba layered beneath Dean's simple and effective guitar, gets the adrenaline going again. Then Collier downshifts for "Fauntleroy Mist," a semi-haunting number perfectly suited to Frisell's sound, and the title track, a rollicking fusion-funk farewell in keeping with the overall vibe of the record. While we'll never know exactly what life was like for a young Tom Collier, it must've been one hell of a wild and colorfulride. At least that's what this music tells us.