By KARL ACKERMANN
October 10, 2014
Sign in to view read count 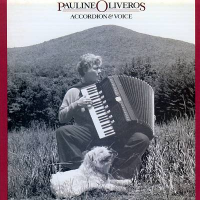 It's understandable if Pauline Oliveros is not a top-of-mind name, even after more than five decades in music. The eighty-two year old composer has been far-removed from the mainstream as a pioneer in the subculture of experimental electronic music and composition since the 1960s and her acoustic instrument of choice is the accordion. Yet her résumé speaks to broad range of interests and an impressive demand for her talents. She influenced avant-garde composers John Cage and Terry Riley, performed with saxophonist Roscoe Mitchell, percussionist Susie Ibarra, producer/musician DJ Spooky and has composed for alternative rockers Sonic Youth. Accordion & Voice was originally released on the SoHo based label, Lovely Music, in 1982 and was the first of Pauline Oliveros's works as a soloist. This reissue—on the Important Records label—is the second such re-lease of this classic recording.

Accordion & Voice consists of two extended compositions, "Horse Sings from Cloud" and "Rattlesnake Mountain," each clocking in at slightly over twenty-two minutes. Oliveros describes these pieces as being musical proxies for meditation but that may imply that they are principally drone-based. While that is a dominant component of these works, Oliveros' accordion adds layers of complexity and texture that push these compositions beyond any singular effect. A mash-up of Brian Eno's Lux (Warp, 2012) and Nils Petter Molvaer and Moritz von Oswald's 1/1 (EmArcy, 2013) might have generated a similar experience. On Accordion & Voice Oliveros had brought together the ambience of the former and dark lyricism of the latter, some thirty years earlier.

"Horse Sings from Cloud" opens Accordion & Voice with an amalgamation of acoustic playing and electronic processing; it's a technique that cultivates Oliveros' unique vision. She uses a customized accordion of her own conception with a large sound chamber, multiple processors, pitch-blending pedals and an extended bass range. In Oliveros' hands, the mammoth instrument is capable of creating acoustic effects beyond the instrument's normal expectations and mutually exclusive of the accompanying electronics where that is her desired effect. The result is a work of surprising harmonic richness and texture. "Rattlesnake Mountain" is a more Spartan piece but Oliveros precisely plots movement and density around a structured core. Her construction results in plush patterns and alternating rhythms.

Dating back to the 1960s, Oliveros had released a number of recordings where the output was focused on electronics. An accordionist since the age of nine, she didn't fully utilize that skill in recordings until Accordion & Voice where she compliments her playing with ethereal, wordless vocalizing. The electronics synthesize harmonics to a greater extent than her earlier work where the pops, buzzes and squelches were represented to a greater extent. Accordion & Voice has an otherworldly and subdued quality that is distinctive and mesmerizing and it's a good place to get familiar with an important voice in music.