By KARL ACKERMANN
September 10, 2019
Sign in to view read count 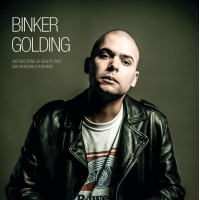 Binker Golding has been gathering a loyal and impressive following on the London jazz scene with comparisons to John Coltrane and Sonny Rollins. Dispensing with some measure of hyperbole, Golding's prestigious UK based MOBO and MOJO awards, and growing fan base lend validity to his local stature. Like Idris Rahman, Nubya Garcia and Shabaka Hutchings (Sons of Kemet), Golding is part of a recent wave of exceptional saxophonists from the London area. Golding's album Abstractions of Reality Past & Incredible Feathers is a departure from the style he has become known for.

Best known as half of the duo Binker and Moses with drummer Moses Boyd, their amalgam of free jazz and driving dance rhythms have drawn luminaries like Evan Parker to jam with them. Binker's work with keyboardist Elliot Galvin on Ex Nihilo (ByrdOut Records, 2019) was more experimental but not without moments of muted melodicism. On Abstractions of Reality Past..., Golding has assembled a brilliant quartet that revels in hard bop with intensity and a solidly contemporary feel.

Pianist Joe Armon-Jones, bassist Daniel Casimir and drummer Sam Jones have traveled in the same general circle. All have played with Nubya Garcia; Armon-Jones and Casimir have also recorded with Golding's duo mate Boyd. The saxophonist composed the seven tracks through reflecting on "future jazz," jazz-funk, and the acid jazz movement of 1990s UK. Golding opens with the fiery "I Forgot Santa Monica," Armon-Jones' solos matching the impressiveness of Golding's. The saxophonist sometimes bookends pieces with stylistic variations; soul on "Exquisite She-Green," a noir air on "You, That Place, That Time." The disturbingly titled "Skinned Alive—Tasting Blood" does recall Sonny Rollins of the What's New (BMG, 1962) era. In fact, much of Abstractions of Reality Past... feels like a resurgence of the 1960s rather than the later decades that influenced Golding.

Abstractions of Reality Past & Incredible Feathers isn't riddled with the wild abandon or embroiled dialog of Golding's previous Gearbox releases, such as Dem Ones, (2015), but neither is it a casual listen. The sax/piano-fueled breaks are fascinating, challenging and evoke the past while feeding the ears with the possibilities of what is yet to come. Golding will undoubtedly be as well-known in the US as he is in the UK, and he offers music for many tastes on this highly-recommended album.

I Forgot Santa Monica; Exquisite She-Green; Skinned Alive, Tasting Blood; …And I Like Your Feathers; You, That Place, That Time; Strange-Beautiful Remembered; Fluorescent Black.