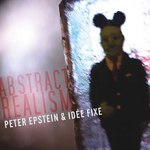 Abstract Realism is the debut recording for the band Idée Fixe, an experimental ensemble under the leadership of saxophonist Peter Epstein, that has been in existence since 1997. Along with Epstein, the band includes guitarist Andy Barbera, bassist Sam Minaie and drummer Matt Mayhall. Special guests for the disc include bass clarinetist Brian Walsh and saxophonist Gavin Templeton. With minimal ideas as the basis for each track, the music takes on spontaneous group thought with cohesive realizations.

As free-form as the compositions may be, the musicians aren't necessarily interested in eschewing accessible traits. In the midst of sonic coloring from Epstein's alto sax and Barbera's guitar effects, a sly groove occasionally settles into place, as heard on the opening "Painfully Simple" and "Dark to Light." That being said, the disc also has plenty of free-for-all moments with high-energy wailing. The tune "Creamy Center" features a raucous back and forth ride with Mayhall's thundering drums blazing a trail for Epstein and Templeton's saxophone mayhem. A disc highlight occurs sans rhythm section on "Air 1" and "Air 2" with Epstein, Templeton and Walsh engaging in an all woodwind, three-way dialogue. The three are able to engage each other's ideas with a natural conversational flow.

The disc-ending title track ties together elements of hypnotic electronica, heavy metal dirge and impulsive superfluities. Dark, yet serene, the lengthy closer leaves the listener in a state of contemplation, ready to relive the disc's enthusiasm for further investigation.