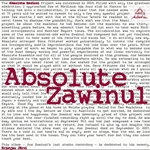 Few musicians have left a stamp on modern music as indelible as Joe Zawinul. In an artistic life that spanned over fifty years, playing and absorbing the sounds of nearly every continent, Zawinul not only wrote and played beautiful music on the piano but also extended the horizons of the synthesizer in contemporary music. No one—not even Ralph Towner and Lyle Mays—has done more for the instrument in all its incarnations and Zawinul, probably out of a certain diffidence, made its vocal peripheral, the Vocoder, something of his own. On Absolute Zawinul, a project that came together in the sunset of his celebrated life with the collaboration of Absolute Ensemble director Kristjan Järvi, Zawinul put on display an awesome array of new music. The participation of key members of The Zawinul Syndicate, his last great band, gives the music on this album added significance. The fact that it was completed not long before his passing gives it further specialness and a memorable character all its own.

Although "Bimoya" and its familiar swing is almost typical of the unique and earthy beat that Zawinul discovered when he co-founded Weather Report, its music only fleetingly recalls late Syndicate work. The album will resonate more for the wonderful sweep of "Sultan," a work filled with magical quarter notes that sway and tumble down its melody, washing the soundscape with glorious Middle Eastern sounds. The spry elegance of "Great Empire" is enhanced by tremulous violins and splashing cymbals that color the tones of Zawinul's own voice as the song unravels to lonely, ululating horns. Its visual sweep is stunning, like an epic drama that showcases the mighty intricacies of Japan, the country it seeks to immortalize in song. Zawinul's trills and dazzling runs on his great bank of keyboards take the quiet processing of "Peace" into an infectious realm, conjuring images of a celestial celebration that it appears Zawinul must now be a part of.

There is a tremendous openness to Zawinul on the disc. This turns his music into a true collaboration here. Members of The Syndicate—the extraordinary Beligian-born Congolese vocalist Sabine Kabongo, and the Mauritius-born bassist Linley Marthe—bring a certain swell and riptide to the harmonic undercurrents of the music as it is explored by the Absolute Ensemble. "Good Day" and "The Peasant" are superbly crafted, as is the only music from Zawinul's late-Report days, "Ice Pick Willy." But it is the elemental beauty of "Ballad For Two Musicians" that seals this extraordinary partnership between Zawinul, less known for his mastery of the emotional content of music, and a group of musicians determined to keep his music pulsating and swaying in a realm that is altogether human, despite the electronic garb.

Ultimately Absolute Zawinul does something for the music of Josef Zawinul that it so richly deserves, immortalizing Zawinul's artistry on a large sound canvas.