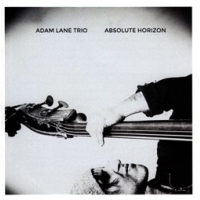 Not enough is heard from Brooklyn-born bassist Adam Lane. He boasts an impressive track record, illuminated by a series of outstanding recordings, mainly on the CIMP label, but culminating in the acclaimed Ashcan Rantings (Clean Feed, 2010). Nothing has surfaced under his own name since, so any new disc grabs attention. That's not to say he has been idle, notching up notable appearances on drummer William Hooker's excellent Bliss Suite (Not Two, 2010) which also featured rising star saxophonist Darius Jones, as well as on the reedman's own Big Gurl (Smell My Dream) (Aum Fidelity, 2011).

But unlike the aforementioned entries in his discography, which paired masterful charts with inventive delivery, Absolute Horizon comprises seven totally improvised cuts, credited collectively to the trio of Lane, Jones (happily on board once again), and drummer Vijay Anderson. Both have been frequent collaborators, in particular Anderson, hitched to the bassist for almost two decades, accounting for the potent shared conception of jazz-imbued free improvisation.

With his rich deep tone, the leader adds a tensile strength to the cohesive exchanges and taut riffs, although some may find his use of electronic distortion on two selections insufficiently differentiated compared to his finely nuanced work elsewhere. On alto Jones' treacly sweetness edging into tart dissonance, allied to soulful inflections and a broad vibrato, invest even the simplest phrases with emotional heft. As may be imagined Anderson meshes supremely well with the bassist, smoothly switching gears between sensitive accompanist and hard driving timekeeper.

Many of the numbers adhere to a template of gradual build up to a pressurized crescendo followed by eventual wind down. At best, what emerges sounds completely natural, inevitable even, with an effortless balance and near telepathic interplay. The title track lays out the band's stall from the git-go: intermittent throb from the drums, spaciously measured bass and elongated alto combining to spine tingling effect.

Other highlights include "Run To Infinity" where Lane's strummed bass settles into a searching vamp, fuelling a yearning alto soliloquy which escalates to a powerful sequence of expressive vocalized howls. Later on the final "Light" Jones spins out his stories over a buoyant rhythmic latticework until morphing into an insistent angular figure presaging a ticking conclusion. Only one thing prevents this being a five star outing: too many of the pieces seem to peter out rather than emphatically concluding, always a difficult trick to pull off after rhythm-based extemporization which sets up expectations of a more definite resolution. But that shouldn't detract from the splendid interaction that comes before, and it certainly shouldn't deter those wishing to hear more from Lane.