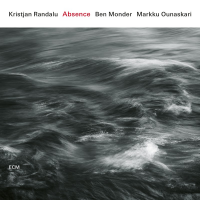 With a gathering, rubato flurry, Estonian pianist Kristjan Randalu, a Chick Corea-inspired student of the late, virtuosic and highly lyrical British pianist John Taylor and his mischievous compatriot Django Bates, begins "Forecast" in whirling descent, before the quiet storm of guitarist Ben Monder and drummer Marku Ounaskari take the weather out to sea, where Randalu threatens to revive the current again and again but instead gives way to clearing skies.

Absence, Randalu's ECM debut, ricochets its motifs and dark, rhythmic overtones with a singular sense of structure and improvisation. The elusive first adaptation of "Lumi I" slowly focuses itself as Monder and Ounaskari establish the territory in which Randalu can ruminate. "Susi I" is a hushed chamber piece, essentially a piano solo that Monder colors like string quartet. While on the topic of colors, Ouanaskari exercises a sparse, Jack DeJohnette-like vocabulary throughout most of the nine tracks. "Escapism," "Adaption I" and "Adaption II" are the kind of rangy, illustrative trio improvisations that have been ECM's forte since the start of the label. "Partly Clouded" at first seems to loom as Monder weaves his cohorts together until the leader, like his teacher Bates, takes the piece elsewhere, past the clouds and into the quiet delicacy of the title track.