Abraham's Cafe at Theatre No 99 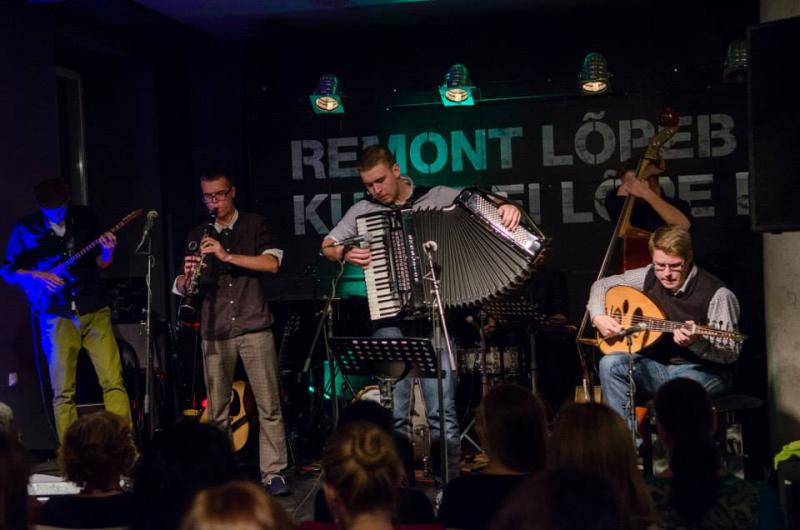 The popular repertory theater Theatre No99 on the edge of Tallinn's charming medieval old town becomes a musical showcase on certain Friday nights. On September 19th, the featured artist was the innovative sextet, Abraham's Cafe whose debut album Journey to Haran was released in 2013 . The virtuoso accordionist Kaspar Uljas led the collaborative group as they created dramatic soundscapes with distinctly jazzy sensibilities. The hauntingly melodic and energetically spontaneous performance included pieces from their upcoming second record that will consist of works written for the Estonian-Palestinian documentary "Grand Pas." The music borrowed heavily from Arabic, Eastern European traditions and spanned 90 minutes. After two sets the ensemble had the, mostly 20 something, crowd that packed the small auditorium, swaying in the aisles, cheering and calling for an encore

Uljas coaxed complex and nuanced harmonies out his instrument with a subtlety and lyricism that characterizes the works of such masters as Richard Galliano and Guy Klucevsek. He exhibited similarly delightful subtlety in his leadership as he allowed his sidemen ample room to demonstrate their own improvisational skills. Joining him on the front line was clarinetist Marten Altrov whose agile and circular phrases and clear resonant tone flowed in thick heady lines around each melody. Atrov's rare forays into the lower registers, as he picked up the bass clarinet, were marked by a wistful elegance.

The focus was primarily on cleverly constructed ad-lib conversations rather than lengthy solos but these did spice up the show occasionally. Guitarist Madis Meister, for instance, opened the encore with a darkly hued, unaccompanied balalaika song that was poignant and poetic. His percussive strums on the acoustic guitar added an intriguingly folkish sound to the pieces while his wailing chords on the electric one dotted the ambience with bluesy hints.

This sextet's unique brand of artistic expression has definitely mesmerized fans in their hometown and their corner of the world. Hearing them it is easy to know why. Maybe it is time that they got the recognition they deserve in other parts of the globe as well. They certainly have the talent and the vitality for it.